"Social capital" is a term widely used in political science and sociology, but its meaning is very different in the two scientific domains. In political science, accordingly to Putnam's recent works on Italy and the United States, social capital is an endowment of a community. In sociology, starting from Bourdieu's definition, social capital is a set of resources individuals can rely on to reach their private goals. The reference definition by Coleman is then analyzed, arguing that it points to the first meaning, though starting from an individualistic approach. The second part of the essay is devoted to a discussion of the various features of social capital as a collective good of a community, founded in a peculiar mix of values. A set of methodological caveats are then stressed - e.g. the need to apply a sort of mertonian hermeneutics - to cope with the main features of social capital: embeddedness in everyday life, and ethical neutrality. A discussion of social capital in Italy is developed in the final sections. Evidence from comparative studies as well as from recent large-scale surveys on Italian students show that the historically rooted lack of social capital is still apparent, so marking as top priority a problem which is as much difficult to solve as hardly rewarding for politicians. 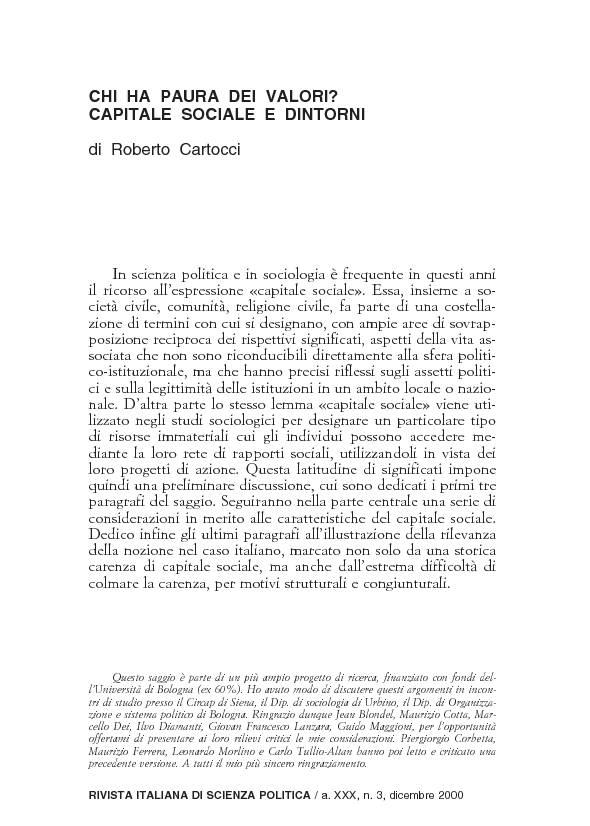