The appropriation of Shakespeare in advertising has adopted varied forms and shapes, ranging from undisguised quotation to oblique allusion, rewriting and parody. In particular, the deployment of Shakespearean plays and characters, or of Shakespeare himself, to peddle the virtues of mass-produced products sometimes favours the "silent quotation", which foregrounds Shakespeare (the genius, the source of authority and cultural capital) and erases his works (the literary nature of his wisdom and the theatrical origin of his fame). This is not a recent development; but whereas Victorian advertising favoured the explicit reference to plays and characters, there seems to be a trend towards the use of the silent quotation during the first two decades of the twentieth-century. In this paper, I turn my attention to how quotations from the works of Shakespeare have been detached from their original contexts and inlaid in in Edwardian advertisements as part of a particular practice of "textual poaching" which inevitably promotes mis-citation and shares much with modern popular culture media - from t-shirts and tattoos to greetings cards and Pinterest. The use of quotations from the plays and poems in early twentieth-century advertising shows the emergence of Edwardian Shakespeare, with critical practices and premises quite distinct from those of Victorian Shakespeare. 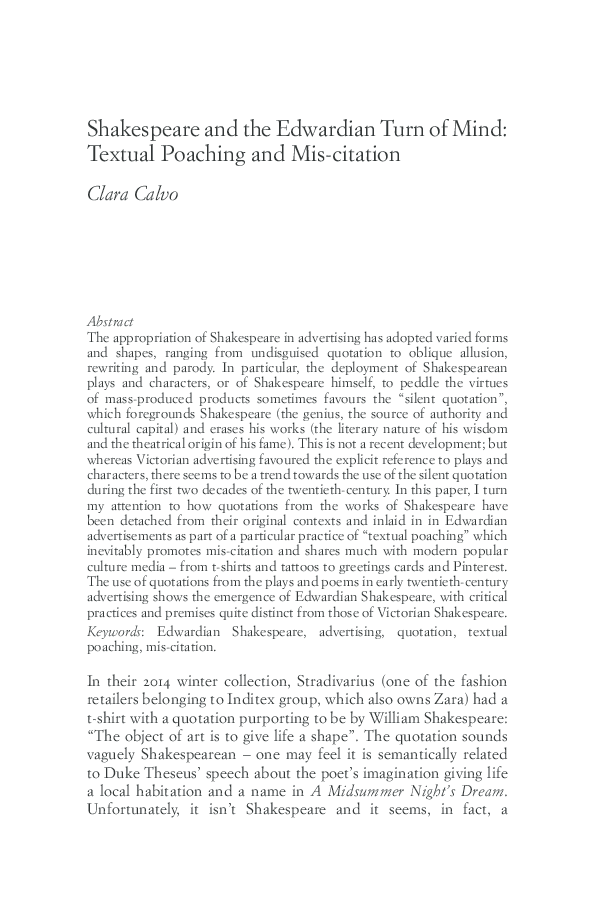