Both the intertextual relationship between "Lovers' Vows" and "Mansfield Park" and Patricia Rozema's cinematic adaptation of Austen's novel have been the object of intense critical scrutiny. The purpose of this paper is to examine them together as belonging to a hypertextual continuum that stretches from Elizabeth Inchbald's comedy to Rozema's postmodern filmic pastiche. From this perspective, Austen's text will be considered as the centre of a network of transmediatic relationships where meaning and representation undergo successive re-adaptations across three centuries as well as across the boundaries between different genres and media. The paper will discuss, in particular, the ways in which the three authors have engaged with generic conventions, social norms, and their 'sources' in order to refashion their representation of female characters and gender dynamics. On one hand this approach will shed new light on Austen's own intertextual practices and the subtle dialectics she establishes with Inchbald by questioning and revising the thematic, ideological, and formal features of different genres, while on the other hand it will allow a fresh understanding of the ways in which Rozema's film re-articulates the contrast between the "two heroines" of Mansfield Park and their relationship to male desire and authority. 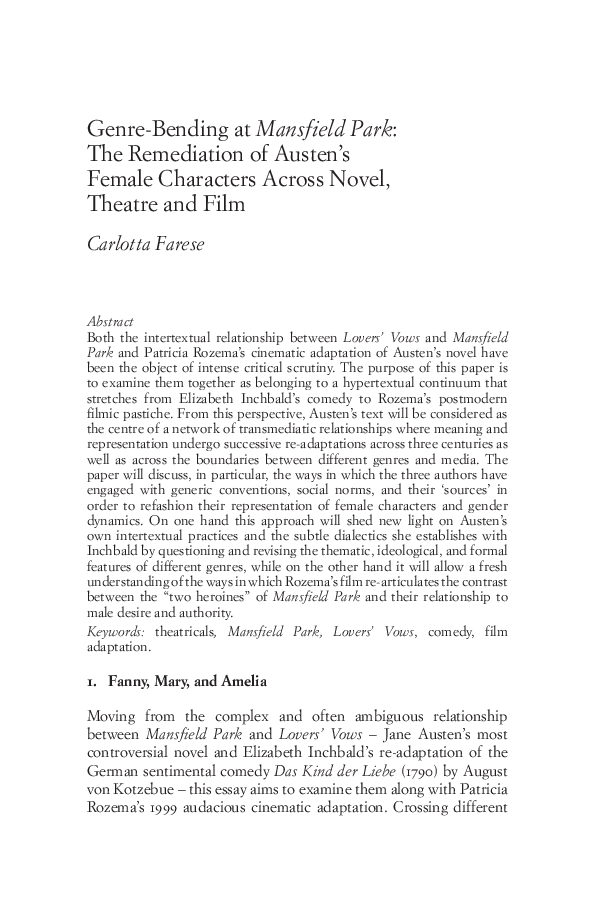