The term "world cinema", derived from the more popular "world music", is traditionally used to indicate "other" film industries, set in "other" countries, inhabiting "other" cultures. Or, to simplify, all that is "non-Hollywood cinema" (Nagib 2006: 30). With the term "World Austen" the present essay wishes to indicate those film appropriations (non-British and non-Hollywood) which translated Austen's plots and characters into other cultures. Over the last century, Austen has become "a commodity, an industry, a corporation, and a celebrity" (Dryden 2013: 103), renowned all over the world, globalised, canonised and modernised. The article will focus on three films, all modernisations of Austen's two most popular novels: "Pride and Prejudice" and "Sense and Sensibility". Even though these films were produced in North America, they do not belong to the Hollywood world: they embody "other" cultures and mindsets and look at Austen from different perspectives. In Utah, Mollywood, the film industry of the Mormon church, appropriated Austen with two adaptations: Pride and Prejudice: "A Latter-Day Comedy" (2003) and "Scents and Sensibility" (2011) while a Latino remediation of Sense and Sensibility set in Los Angeles was released in 2011 with the title "From Prada to Nada". The analysis will focus on the way these adaptations re-elaborate the textual material using it, as will be explained, as textual archetypes (Eco 1987: 2000), suitable for embodying stories about local society and providing teachings to the inhabitants of those cultures. The article will draw attention to how the Austenian "memes" (Dawkins 2006: 192) "travel to different cultures and different media" (Hutcheon 2013: 31) sometimes adapting to the new environment and, at other times, recovering their original essence. The paper will then analyse the mutation or the permanence of these memes, highlighting the common themes of female empowerment and the preservation of traditional values. 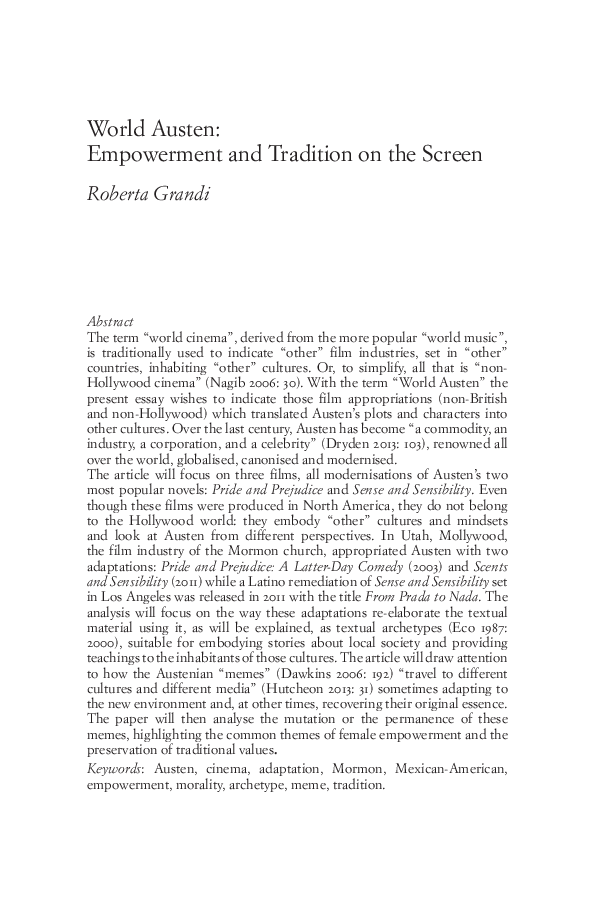