«As a painting portrait of the court of Urbino» so Castiglione defines "The book of the Courtier", in the Dedication Letter addressed to the Portuguese bishop Don Michele da Silva in 1527, just before the "princeps" edition of '28 was published. Castiglione in this Letter, seems to have chosen to present his book as it was a portrait. It looks like a critical claim and almost a guide to the reading of his book, inviting us from the first pages to a direct confrontation with the contemporary artistic and aesthetic culture. In line with Leon Battista Alberti's renaissance postulate for which the portrait is the art that can present absenteeism and bring life to the dead, Castiglione seems to have found in the formula of "ut pictura poésis", the stratagem to tune his "Courtier" on history. The troubled editorial gesture of the "Courtier" shows in the Castiglione's thoughts, corrections, "tormented affright upon the textual body", in the changes between the first and the last editing, an author increasingly aware of the irreversible crisis of the society frescoed by him. This changed intellectual attitude seems to be able to be read not only in the last version of The book of the Courtier, but also in two beautiful portraits of the Baldassare, painted at a distance of just over a decade. The most famous portrait is the one painted between 1514-1515 by Raffaello, probably the most faithful iconographic representation of "The book of the Courtier", at the stage of his first editing. In a sophisticated game of mirrors between the canvas and the book, paraphrasing exclusively the words that will be written by Castiglione, we will find ourselves in front of a portrait with which it seems possible to dialogue and a book based on dialogues that consciously takes the shape of a portrait. The second painting, dates back to 1529, and is generally attributed to Titian. The awareness of the crisis of Italian politics had been translated into the will of Castiglione to interpret differently the literary and courtier's experience, and led him to a deep rewriting of "The book of the Courtier", transforming the book into a very different portrait from the one sketched in 1518. Even the world portrayed by Titian is a different world, seeking new expressive means, and his Baldassare Castiglione, unlike the one's of Raffaello, is no longer a portrait about to speak, but is mute, realized through the intellectual filter of memory and the emotional one of disillusion. Throughout his long career, Titian will bring Western art out of the aesthetics of the Renaissance, sensing the limits and contradictions, and in the portrait of one of his greatest prophets, Castiglione, is it possible to grasp those thin signals that will explode in the great and tormented season of European Mannerism. 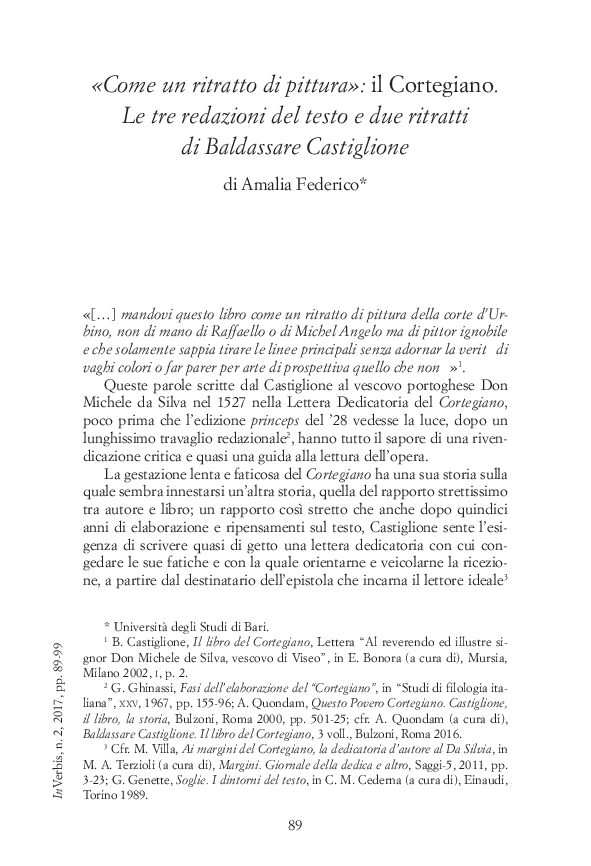