The essay aims to present a discussion of the evolution of a European idyllic neoclassical model that, starting from the English poetic experience of Pope, arrives, with the "Ragionamento sulla poesia pastorale e particolarmente sopra gl'idilj di Gessner" extracted by the "Idea della bella letteratura alemanna", in the Switzerland of Salomon Gessner, whose fame was mediated in Italy by Aurelio de Giorgi Bertola. The Pope-Gessner combination, founded on the similar landscape representation of a nature herald of happiness (the rural compositions of both of them enhance the beauty of nature and the simplicity of the affections) is to be identified as the decisive junction for the next poetic development of the Abbot, from the city of Rimini, Bertola, whose literary experience is set programmatically along precise coordinates of renewal compared to its antecedents and in the direction of the definitive disconnection with the Arcadian poetics. Gessner, to whom the Abbot attributes the function of mediator of the moral and artistic lesson of the Ancients, appears as the bourgeois updating of Ethos of the ancient republics. If the «Teocrito di Zurigo» thus completing what Pope had begun and partially implemented in England, will be Bertola - whose writing never loses sight of the intentions of eighteenth-century reformism - to illustrate a now definitively outlined image of bourgeois idyll, perhaps even realized in that masonry society to which he belonged. 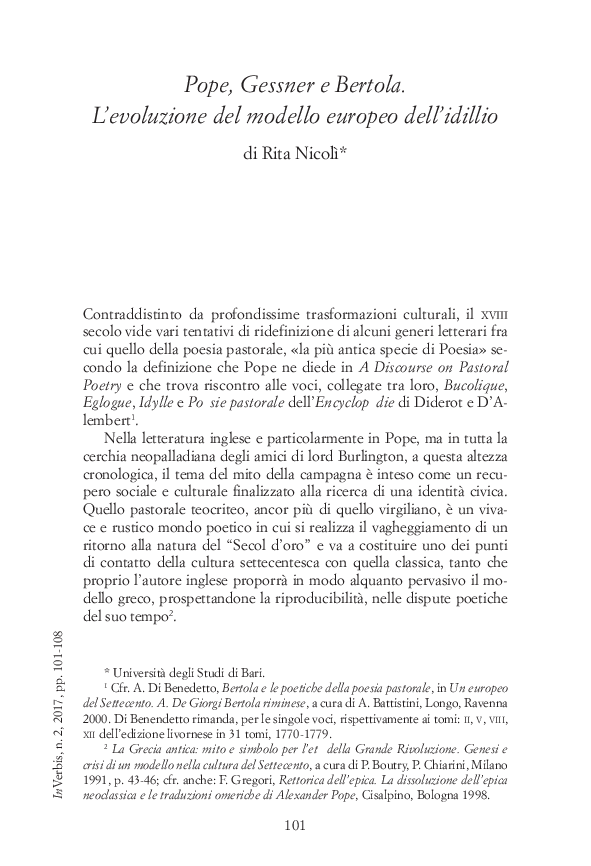