Electronics for general use – also known as «consumer tech» – are designed to provide instantgratification to their users, primarily via four design features: hyper-velocity (epitomised by shortened delivery time), over-simplicity (embodied by simplified user interfaces, accessible to anyone, regardless of their level of expertise), singularity (exemplified by digital services and products tailored to users’ needs and expectations) and (occasional) free-of-charge access to digital services. Consumer tech’s instant-gratification, however, comes at a cost: a lower average quality of its products and services when compared to their analogical – or professional – counterparts. As consumers, we may accept standardised low-fi technology, and adapt to the trade-off between rapid gratification and lower quality. This compromise, however, becomes unacceptable when we step into the shoes of citizens interacting with public administrations via online platforms or other digital means. Hence, the paradox of low-fi digital public services. Democratic decision-making is antithetical to consumer technology on four grounds. First and foremost, digital democratic spaces must necessarily stay inclusive. Consumer tech instead can be – and often is – exclusive. Second, public regulation is designed for durability, while consumer tech plans its obsolescence. Third, norms and rules are directed to large and undifferentiated communities (with rare exceptions of ad-hoc approaches). Fourth, digital public services differ from consumer tech in terms of reliability. Consumers may always opt out and adopt cheaper alternatives – citizens can’t. Higher complexity, extended duration and lower accessibility are passively accepted by many of us as regards the analogic, offline, public services. However, our acceptance quickly turns into frustration when we relate to, and engage with, digital public services. We expect our digital institutions to be easy to interact with, capable of responding both immediately and effectively to our demands, and possibly in a personalised fashion. In this article I propose to re-conceptualize the aesthetics of digitalised public services. I suggest ownplaying the idea that digital decision-making can only be effective when it delivers rapid and successful responses to the issues of the day, regardless of its complexity. I propose three actions to sustain highly performing digital government: first, elaborate a storytelling approach to digital government that shifts the focus from immediacy to complexity; second, frame digital public spaces with a focus on the interactions, not the outcomes; third, and finally, encourage civic engagement through creative approaches (through game-design elements, for instance 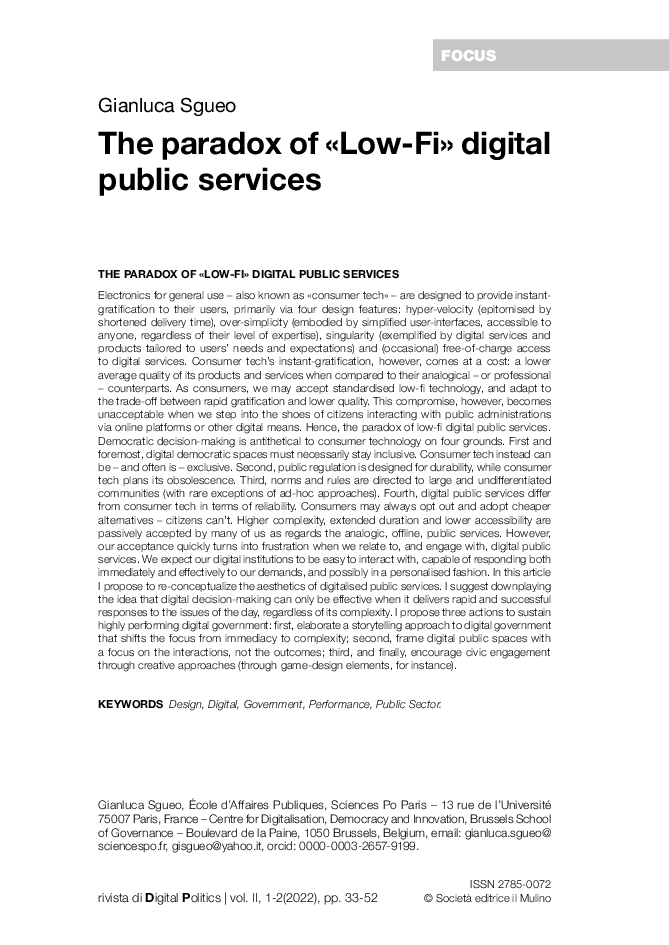