Since the mid-1990s, the development of Icts has accompanied the modernization process of public administration. Almost all governments have adopted plans to apply them to the provision of public services also under the influence of the European Union. Among them the Italian government has heavily invested in digitalization policies aimed at modernizing its office and making the relationship with citizens more transparent. Now the offer of e government services is quite high, as reported also by the last Desi Index 2022 report. Unfortunately, the level of interaction between citizens and institutions through digital services is still low, mainly due to the level of citizens’ digital competences. To cope with this problem, in 2019 the Veneto Region financed a network of ten Innovation Labs distributed around the Region and aimed at promoting digital literacy, the reuse of open data, and user involvement in open innovation processes. Innovation labs (or Living labs) are physical spaces managed by local public administrations, often in collaboration with civil society organizations and experts. They organize diverse activities targeted at citizens, such as workshops, seminars, laboratories, hackathons, product testing and prototyping that are ideated and co-produced with citizens. Using a framework to assess different types of user involvement in open innovation, the paper aims at analyzing the impact of Innovation labs in promoting citizen engagement in digital contexts and to identify their main strengths and weaknesses as «agents» of digitalization 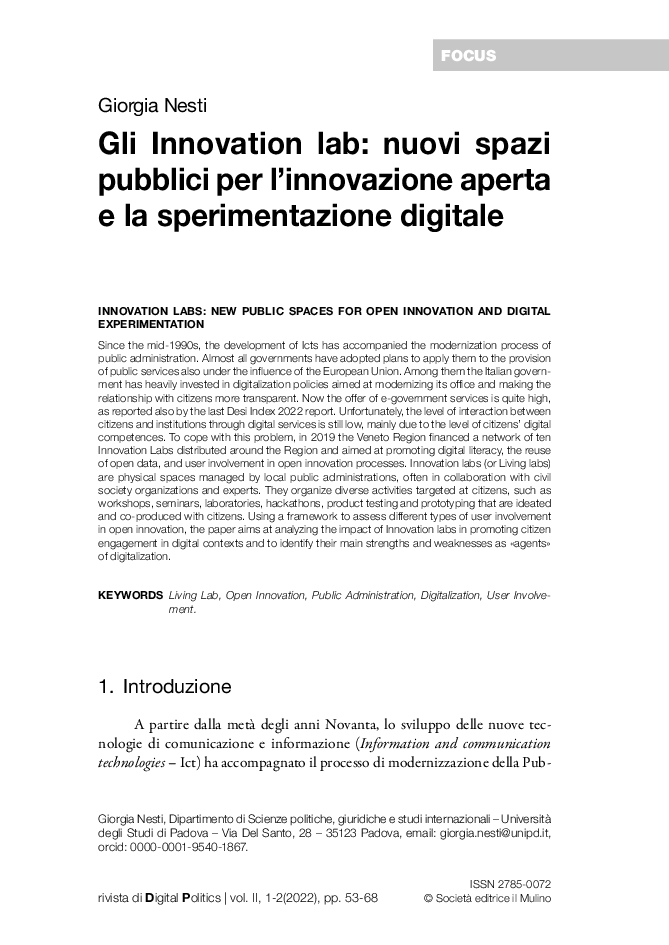