In contemporary democracies storytelling has become a crucial tool in leaders' communication strategies. Its use has developed along with the growing phenomena of personalization and mediatisation of politics. The highly personalised and mediatised leadership of Matteo Renzi, from February 2014 to December 2016 the Italian Presidente del Consiglio and since the end of 2013 the leader of the Democratic party, offers a very good example of how storytelling can play a fundamental role in building the leader's image. After a sketch of Renzi's narrative when in government, the article analyses the storytelling that he developed in order to support the approval of the referendum called for the 4th December 2016 on the constitutional reform he had promoted as a crucial policy of his government. This analysis shows how the storytelling built around the constitutional referendum represents both a specific example of the more general narrative adopted by Matteo Renzi and an extreme case of his personalised narrative and politics. Furthermore, it highlights the relationship among the strong personalization of the constitutional reform issue, the declining popularity of Renzi and the final rejection of the referendum.Finally, the article puts the case in perspective and proposes an interpretation of Renzi's leadership in the light of some suggestions coming from the literature on political communication and on democracy and, in particular, in the light of some criticisms to the contemporary mediatised and personalised leadership. 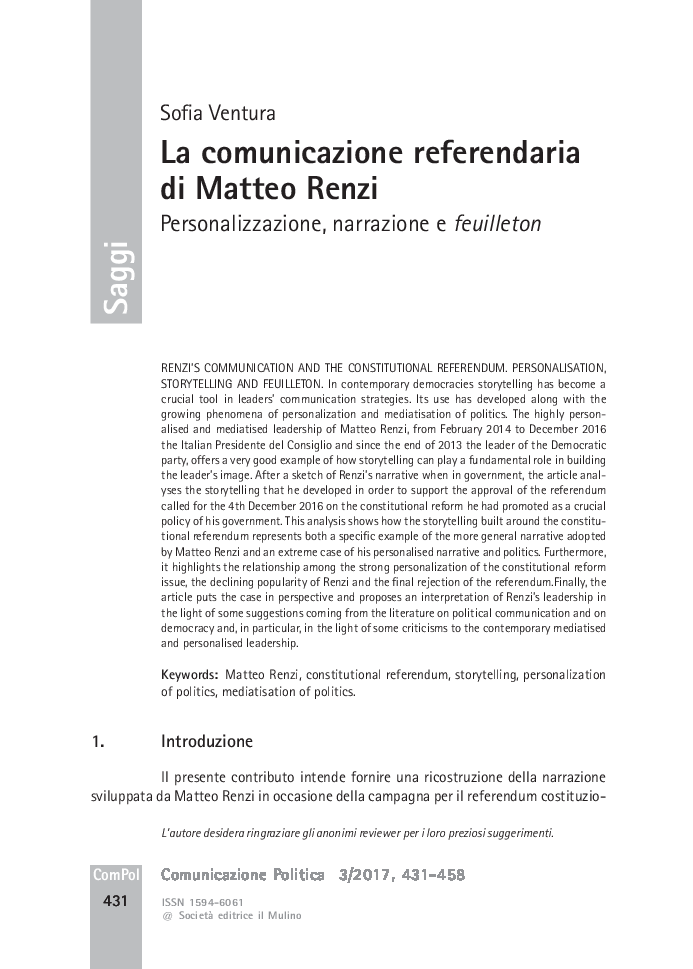