Over the years, the role of Europe in the life of the member countries and in international contexts has become irrefutable evidence. Although the outbreak of the economic crisis and the processes of globalization promote federal policies and oblige national governments to transfer part of their supremacy on important themes in the national public opinion, Europe remains a difficult subject to handle (Kirchner, 1992; Keohane and Hoffman, 1991). Based on this awareness, this paper aims to analyze the weight that Europe has taken in the public debate and in the internal dynamics of recent opinions, to get at dealing with the role it had in the last elections. For the first time, European actors have entered into competition and they have attempted to influence the outcome of the vote. The purpose of this article is to underline how the process of the European integration, through ups and downs, has become a part of the Italian debate, producing effects which are not always linear. On the one hand, the media system and policies are in part adapting themselves to change, on the other hand public opinion does not seem to be so favourable. Besides their outcome, elections can also be considered an indicator of the complexity of the process that the European project is going through. The purpose of this paper is to analyze the coverage of press and TV on Europe in the 2013 electoral campaign in search of the interpretive frames present in the public discourse. It interweaves these frames with the data of opinion derived from the surveys of the same period with the aim of describing and explaining, through a causal model, the process in progress. 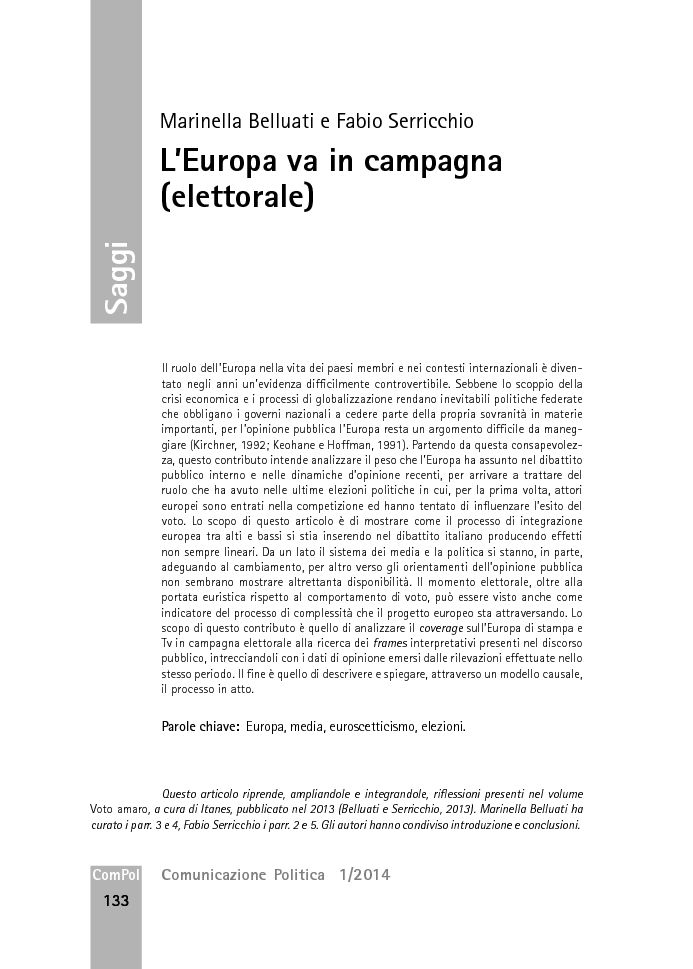