This research is aimed to provide a general outlook of social security evolution, keeping as main reference the doctrine which in the '60 explained the Italian legal system in accordance with the principle that freedom from need must be achieved for all citizens by means of State intervention. The starting point is the plan of social security contained in the "Social Insurance and Allied Services" report drew up by William Beverdige in 1942, in which is outlined a wide and ambitious scheme of social policy on an universalistic basis, whose main purpose was the freedom from want. During the following years, especially in the '60s and the '70s, welfare state theories shows a progressive enlargement in the State's role which, as a matter of fact, come up against one main obstacle: the political feasibility of social models envisaged at that time. Yet in the middle of '70 many factors, due to changing in the national and international contest, deeply modified the social-economical framework that made possible the welfare state expansion. The second part of the research focuses on the problem of pensions in UK and Italy; the shifting balance of conservatives government policies from state to private pensions registered in the first country is compared with the legislative choices of the 1995 reform of Italian public pension schemes. An open ended conclusion goes into some general considerations about new proposals in dealing with an unavoidable reduction of State's intervention in the foreseeable future, which must be compensated by a mix of solidarity and efficiency. 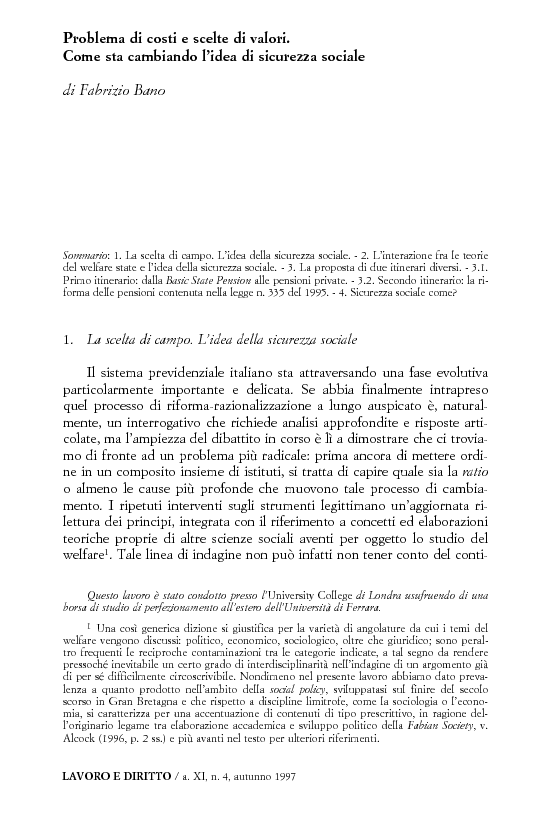