In late nineteenth century Italy, the birth of the electricity industry was a stepping stone for the modernization of the Country. In fact, the scarcity of coal resources did not allow a real industrial take-off, and the development of hydroelectric technology succeeded in making up for this shortage. Thus, in the first thirty years of the twentieth century, a private electricity management system was created in Italy which took the shape of an oligopoly due to the difficulties of the internal capital market, the intrusion of mixed banks and with the support of state authorities. The State intervened concretely in the sector, first facilitating the release of concessions for the exploitation of waterways, then financially, with the creation of bodies dedicated to financing industries of public interest, such as the CREDIOP, the ICIPU and, finally, after the 1929 crisis, the IRI. Despite everything, over time the gap between North and South of the country increased, even in the field of electrification. Thus, as early as the end of the 1930s, the IRI had a shift in a southern direction, which brought greater attention to the electro-commercial companies of the South, SME above all. Public intervention in southern electricity was subsequently intensified with the creation of the CasMez, which in the second half of the Fifties supported the modernization of this sector to bridge the gap, both in terms of electrification and development, with the rest of the Country. 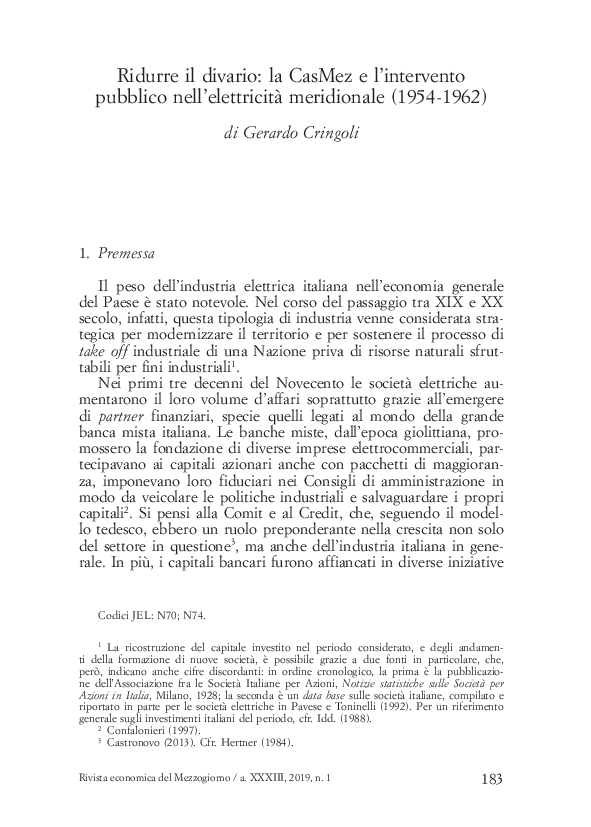