In the fifteen-year Giolitti period, Nitti was the first to draw up an organic plan of economic policy, whose implementation profoundly influenced the future of our Country: in his project, the State, becoming the centre of financial resources - first of all with the INA - would have had available funds to employ for the promotion of development, for an energy policy and for the relaunch of the South. However, Nitti's statism in these years should not be seen in an absolute and total sense, but in consideration of the economic needs of the individual problems: his radical policy provided for the South a modern industrialization, in a European perspective, with a tangible presence of the State through public works, road construction, incentives for new agreements. Nitti's broad vision of the overall evolution of the twentieth-century capitalist system, which considered a complex process to extend public intervention in the financial field, was consolidated during the years of the regime precisely at the hands of that «technocracy» coming from Giolitti's ten-year government, and who succeeded in putting into practice an alternative credit system to the State one. The profound influence of Nitti's thought on Italian economic policy in the following years was due to the fact that a large part of the ruling class linked to him took the lead in bodies with which the State increased its presence in the economic life of the Country: in addition to Beneduce, just think of the key roles of personalities who had collaborated with Nitti, from Sinigaglia to Cenzato, from Serpieri to Francesco Giordani who, as President of the IRI, was the main architect of the development plan for Southern Italy, with the contribution of Menichella and Saraceno. 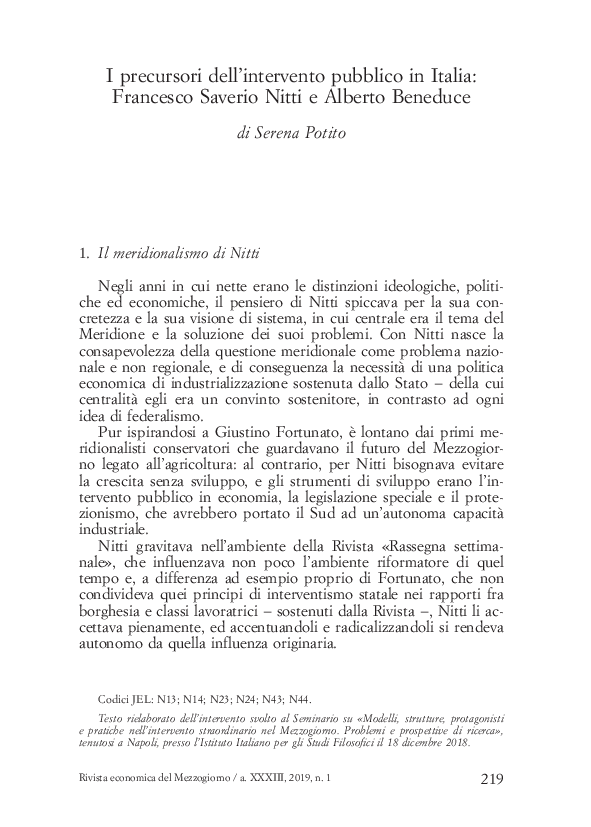