There are four issues that need to be dealt with in a contextual way, if we want to tackle the issue of the development of southern port facilities: 1) the role, little known, of the great crime organizations in the management of some port traffic segments; 2) the dispersion of professional skills; 3) changes in the strategic horizon of global maritime traffic; 4) the need to attract industrial investments. Legality is essential to competitiveness, even for maritime activities. This would be an issue and an interesting front for international cooperation between police forces, but it should be noted that so far the sensitivity of other EU countries has been too low: they prefer that the logic of port competitiveness prevails to the detriment of security and the fight to illegal trafficking. The relaunching of Southern Italy begins with the use of professional skills and human resources that are abundant, but not used, in our Regions. With reference to maritime activity, it should be noted that the port job map has changed. Ports have recently experienced what has been called the fourth-generation revolution, with a shift of centrality from port operations to forms of logistical integration in the cycle of value chains on a global scale. The digital revolution - and the innovations of the production process that industry 4.0 entails - will deeply change the organization of work in all sectors. What will be the outcome of this overall redesign of the economic system is one of the most difficult questions to solve at present. The crisis of mere transhipment lead to a necessary redesign of the Mediterranean port bases. Therefore, the gateway function takes on a leading role again, confirming that port systems can be competitive provided they know how to build a dialogue between surrounding territories and the system of maritime connections. In comparison with the turnover before 2008 global financial crisis, Italian gateway ports performed better than hubs. To seize the opportunities that may arise from the re-articulation of trade, routes and connections, new tools of industrial policy are needed. The establishment of the Special Economic Zones (SEZ), in Campania and in the South, will be the test bench within which this integration capacity will have to be applied, precisely to maximize the attraction of adequate investments to relaunch the manufacturing, logistics and port development of this territory. SEZs open a new season for development policies in the South - neither indiscriminate incentives, nor direct State interventionson the economy. The productive forces will be able to count on a setting of greater competitiveness determined by instruments of simplification, adequate tax credits for the implementation of investments, contiguity to areas already equipped with infrastructures and services for logistics. 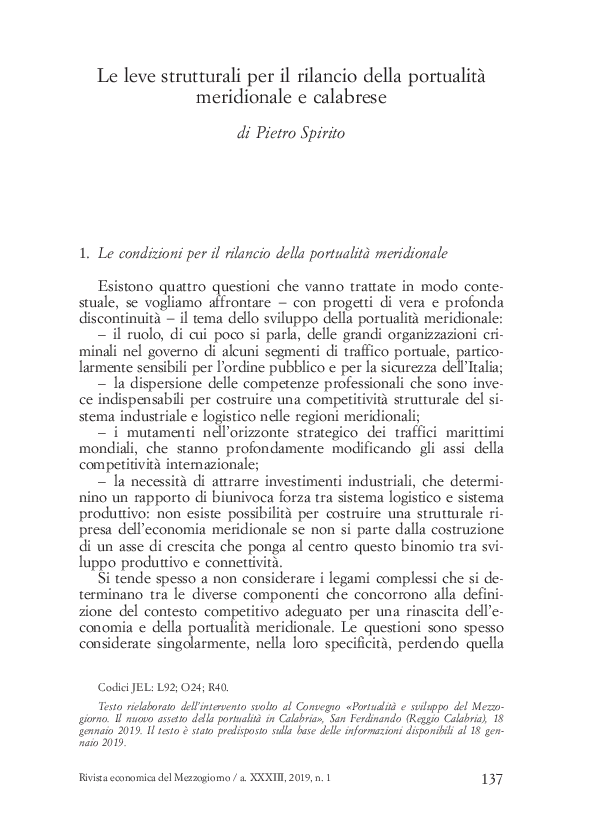