This paper is a rewriting of a paper delivered by the Author when Mauro Fiorentino launched his book «La questione meridionale dell'Università» in April 2016 at the University of Rome «La Sapienza». Two issues rise significantly: the first general one, regarding the crisis of the Italian University as a whole; the second one refers to the territorial features of such issue. About the first issue, one of the main criticalities is represented by poor human and financial resources invested by Italy in academic education; such resources have been further cut by our Country over the last few years, within an overall disinvestment in the education sector altogether. But rationing the resources allocated to research and Universities, since the 2009 reform, has resulted in a clear territorial differentiation, which is leading to a gradual crumbling of the University system in Southern Italy, disadvantaged by the mechanisms of requirements, collected taxes, obtained orders, employment time after graduation. All this has led to a growing «university migration» from South to North as well as to a lack of capacity by southern Universities to attract students. In order to overcome such criticalities, it is not sufficient to guarantee an increase in resources, but it is fundamental, among others, to review the rules of allocation of the Operating Fund ("Fondo di Finanziamento Ordinario", FFO), which provides financial support for the Universities and represents their main revenue, as well as to reconsider the rewarding criteria affecting gradually the amount of resources allocated. 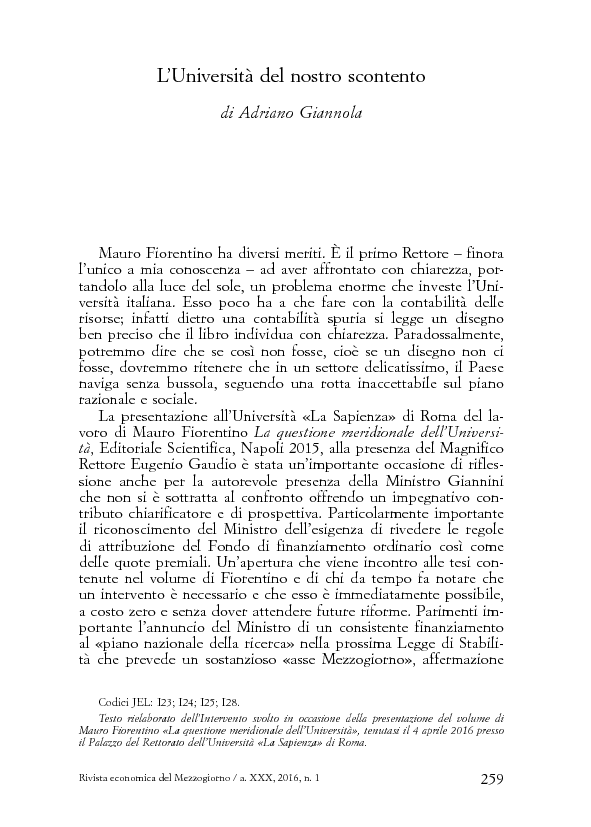