In this paper, Southern regions are thought to recover a more effective function in affecting Masteplan's definition, also by means of a development action plan, divided into exact priority and unifying issues, within a growth perspective focusing on the Euro-Mediterranean area. Therefore, it is a matter of giving rise to a movement of ideas of culture so as to arouse South's spirit, as the EXPO' did in Milan. The need to overcome the structural criticalities of State interventions in cohesion policies, which led to waste no less than three cycles of Eu funds, from 1994 to 2013, leaps into the foreground. Only in Italy, compared to the main European countries, every 4/5 years the name, type and purposes of public intervention are necessarily changed: Ministries and Agencies open and close on Cohesion policies, with both the ease of «insiders» and the incredulity of intellectual circles. Twenty years after the abolition of the extraordinary intervention of the Agency for the South, over 45 years after the entry into force of the regions, we had to register the failure of right, centre and left regionalism over the years. The functioning of the institutions is not neutral with respect to growth perspectives of an area, especially if it is an area whose development is lagging behind. The culture of subsidiarity as a European value, strengthening the levels of government closest to citizens, in a context that is increasingly globalizing, can enhance the peculiarities of the territories and exploit their advantages and positive aspects. Only an exceptional commitment of all the «vital points» of the Republic can help Italy, and first of all the South, to stop mafia raids and to experience virtuous development paths within the law. 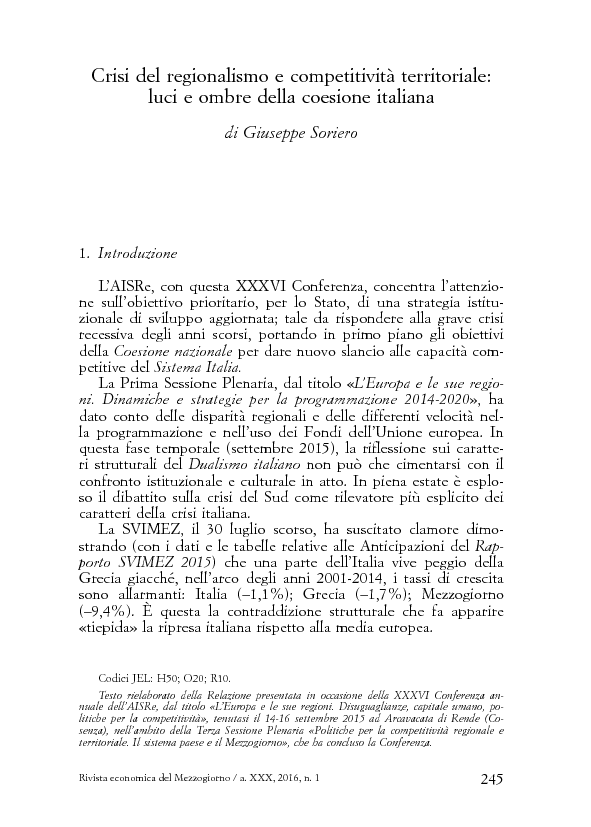