Neuromarketing is the multidisciplinary field of research whose aim is to investigate the consumers' reaction to commercial advertisements, or to the product appreciation, from a neuroscientific perspective. In fact, there are high hopes that neuroimaging technology could cope with some of the unsolved problems that marketers face. In particular, the neuroscience field is thought to be able to reveal information about consumer preferences which are unobtainable through conventional methods, including administering questionnaires to large samples of consumers, or performing psychological personal or group interviews. In this scenario, we performed a series of experiments in order to investigate cognitive and emotional changes of cerebral activity evaluated by neurophysiologic indices during the observation of several Tv commercials. Thanks to high resolution electroencephalography (hrEeg) anno XXIII, tools, we were able to track the electric brain activity and correlate the spatiotemporal variations of such signals with spontaneous recall and pleasantness score, as verbally declared by experimental subjects after the signal recording. The results led to define cerebral variables reflecting the personal appreciation during the time evolution of the tested Tv commercial. The present findings show how Eeg methodologies, along with the measurements of autonomic variables such as skin conductance and heart rate, could be used to obtain hidden information to marketers, not obtainable otherwise, and, most importantly, how these tools could help to analyse the perception of Tv advertisements. 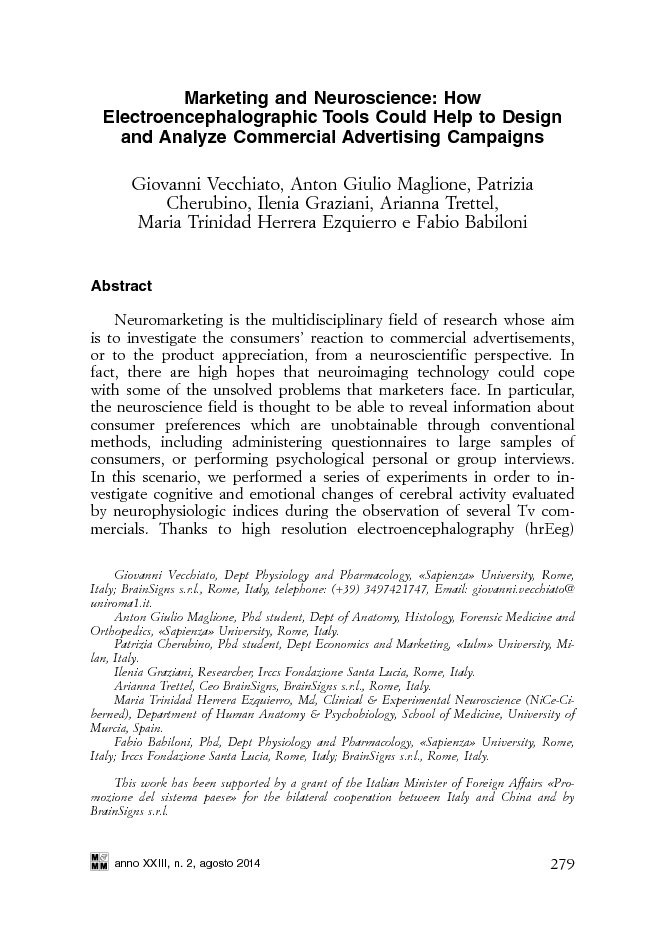