The study explores citizen/consumer's sentiment in Italy for the years 2006-2007. The data were obtained from a quantitative/qualitative tracking survey conducted on social and consumer climates in Italy (source: GfK Eurisko). The results indicate that the upswing in sentiment that was seen up to mid-2007 was followed by a sharp downturn in the second half of the year. Economic forecasts/perceptions for the near future (2008) of Italy have been severely affected by this downturn. The reasons for the decline are ascribed by interviewees to two main issues: a) a perceived marked increase in consumer prices (especially food, petrol, utilities); b) a heightened sense of insecurity about Italy, motivated mainly by economic concerns (jobs, taxes, salaries/pensions). Despite the problems presented by the ongoing situation, a strongly reactive and proactive trend has been observed in the population at large. This trend emerges in two distinct ways: one points to a personal, private approach based on subjective searching for the best possible way to adapt to the situation, essentially by applying a flexible/pragmatic attitude to spending strategies and identifying the most beneficial trade-off; the other - of a social/public nature - is based on the search for partners (political and business players) with whom to build shared prospects for the future. The implications of the study's results are discussed with reference to marketing and to opportunities for developing further researches that can integrate the two sides of the sentiment spectrum, i.e. referred to both citizens and consumers. 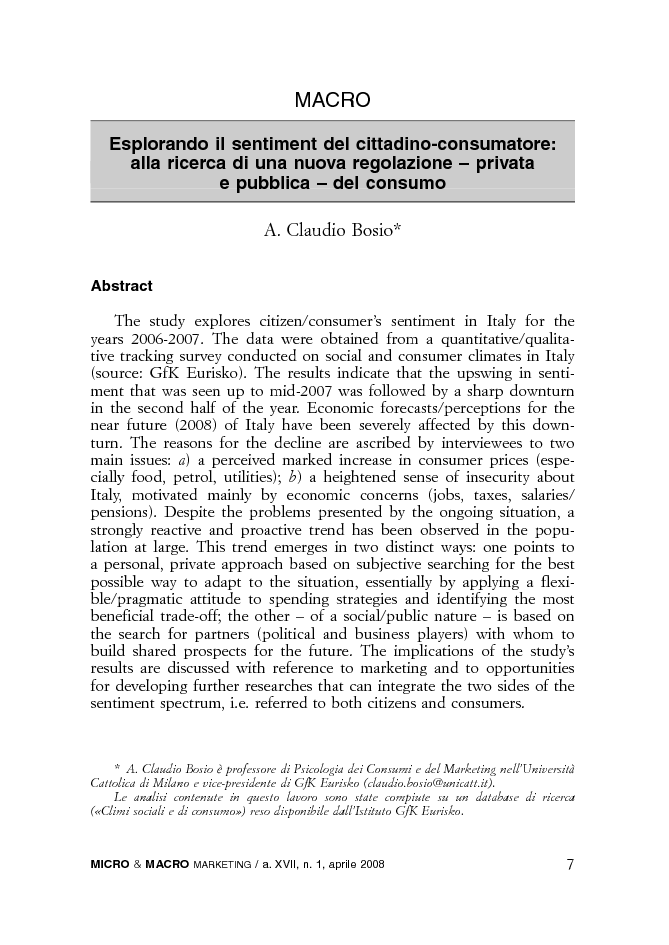