The article presents the results of different research the author developed since 2004 on judicial reforms and anti-corruption policies in Romania in the context of the EU enlargement process. Romania with Bulgaria is frequently defined as a successful laggard of the fifth EU enlargement. Both countries in fact, even after the accession in the EU, are facing many problems in term of state capacity, especially in the sector of judicial reforms and anti-corruption policies. For Romania, judicial and anti-corruption policies were particularly critical even in the pre-accession phase. For this reason a safeguard clause was included in the Accession Treaty asking for more compliance in this sector. Using the process tracing method, the article focuses on judicial reform and anti-corruption policies during the pre-accession and post-accession stages, with the aim of analysing the causal mechanisms related to the Romania's adoption of EU-driven rules. During the pre-accession stage, the EU-driven rule adoption was mainly due to the reinforced EU conditionality and to the role played by the Ministry of Justice, acting as an agent of change. Nonetheless, the adoption of EU-driven rules was challenged by veto players: in particular the Constitutional Court and the Court of Cassation, that in 2005 rejected the justice reform package. The analysis of the post-accession phase shows that, once the membership was acquired, the efficacy of the European conditionality drastically decreased and justice and anti-corruption reforms were hindered by domestic political actors, producing in some cases «reverse domains» in the process of democratic consolidation. 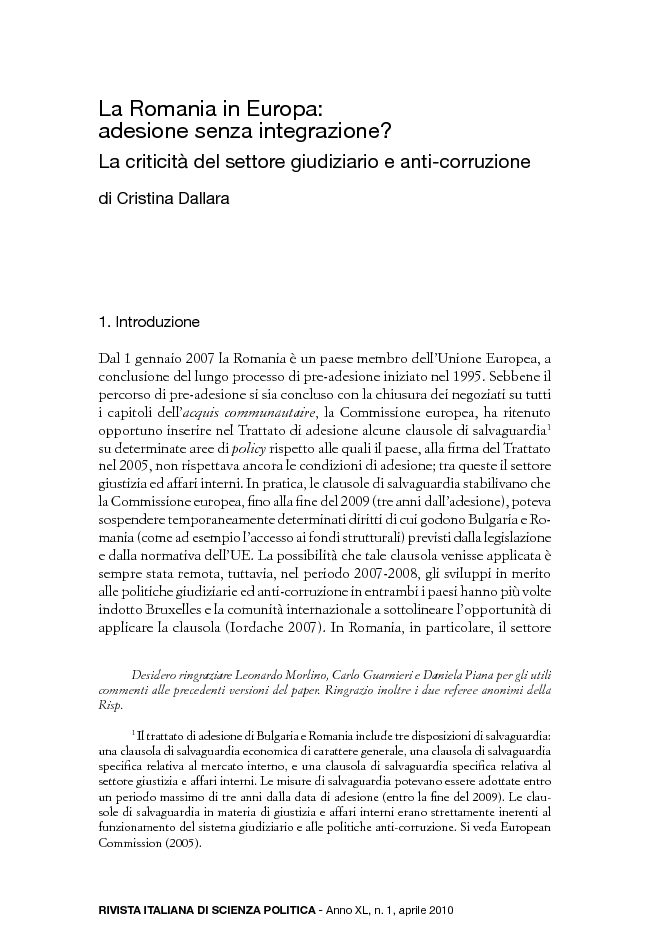