This article presents some of the findings of an empirical study on Forza Italia's local administrators. The peculiar genetic model of the party, comprising neo-patrimonialism, charisma, business-firm elements and entrepreneurial style, makes its institutionalisation highly unlikely at the central level. However, an organisational consolidation might take place at the local level, where the distance from the patrimonial centre could enhance a more direct and enduring identification with the party by local élites. Although such a development may be actively adversed by the leadership, afraid that it could limit its freedom of manoeuvre, there is a likelihood that the need to fill candidate lists for local elections will eventually lead to an opening up of the party, enhancing a more significant involvement of local administrators in party life. Such development would entail a major effort by the party to play an active role in providing local administrators with incentives of a collective as well as a selective kind. In order to explore the exchange relationship between the party and its local administrators this article concentrates on three arenas of interaction: the recruitment and selection processes, the electoral campaign and the party's everyday working. The results suggest that Forza Italia's institutionalisation is still far to come, since its local administrators have neither become well integrated in the party organisation, nor have they been able to form a cohesive group. 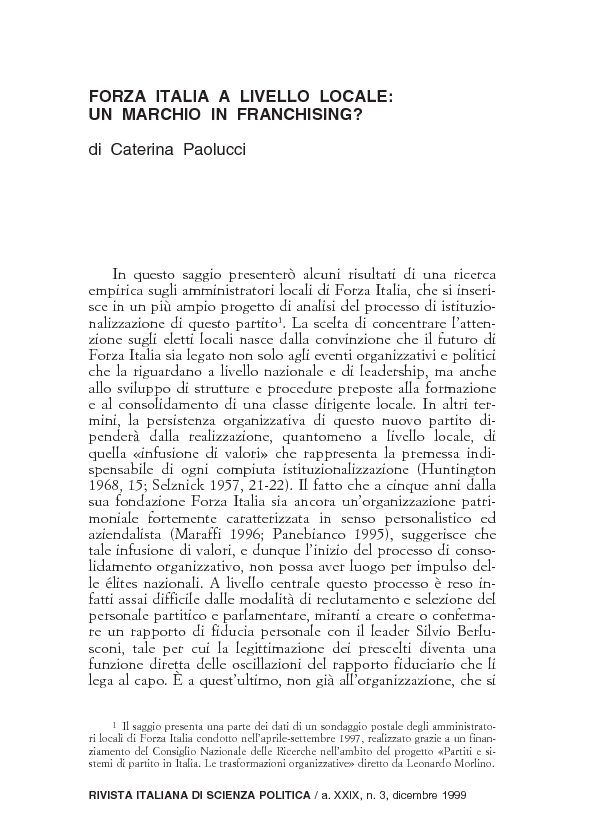