In several occasions during the Bosnia crisis public opinion was explicitly used by Italian politicians to justify their reluctance to be militarily involved. To understand the role public opinion played in the Italian foreign policy on the Bosnia issue, we first examine the nature of the opinion-policy relationship in the Italian political system. We then discuss the available survey data on the attitudes on Bosnia. Third, we study the main determinants of Italian public support for a military intervention. Our main conclusions are four. First, we found strong and quite steady public support for a more active armed involvement of Italian troops in Bosnia. Second, support is in contrast with the prevalent reading of public opinion among the political élite. Politicians perceived the public as opposed to the actual use of force because of fear of casualties. Third, this gap between the actual and perceived public opinion is a consequence of the fact that for the political élite public opinion is represented by their fellow MPs opinions and by the mass media editorials rather than by the climate of opinion as measured by polls. Fourth, the role of public opinion is changing in Italy, as the Kosovo crisis has recently shown. Public opinion, as expressed by mass surveys, is more and more taken into account by Italian politicians in their calculations. 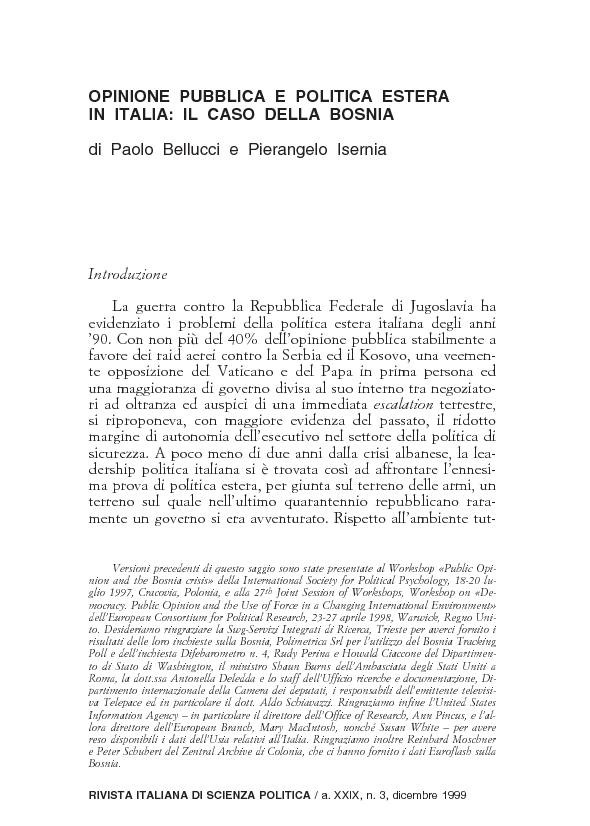