Seymour Martin Lipset is one of the most productive and innovative social scientists of the 20th century. Some of his many books and articles have become classic texts, in particular his seminal book "Political Man" (1960). Despite the broad scope of his work, Lipset's writings have one single focus, i.e. the study of democracy. He has studied the social and political factors conducive to democratization and the stability of democracy, taking into account social structural conditions, the role of intermediary organizations, political culture, electoral behavior and political leadership. His work is theoretical as well as empirical, and his perspective has always been a comparative one, referring to practically all major world regions. Lipset was the first to put forward the idea that socioeconomic development is an important precondition for democratic development and that economic success may in turn contribute to legitimize newly democratized regimes. He has also emphasized the central importance of a competitive party system for sustaining (intra-organizational) democracy. As an American, Lipset has finally always been intrigued by the exceptional character of American democracy which he traces back to a historically unique combination of favorable circumstances at the time of its foundation, i.e. of social structural conditions (high levels of social mobility), a specific value system (individualism, equality of opportunities, religiosity) and the availability of political leaders intent on creating a republic based on popular sovereignty that was without precedent at the time. 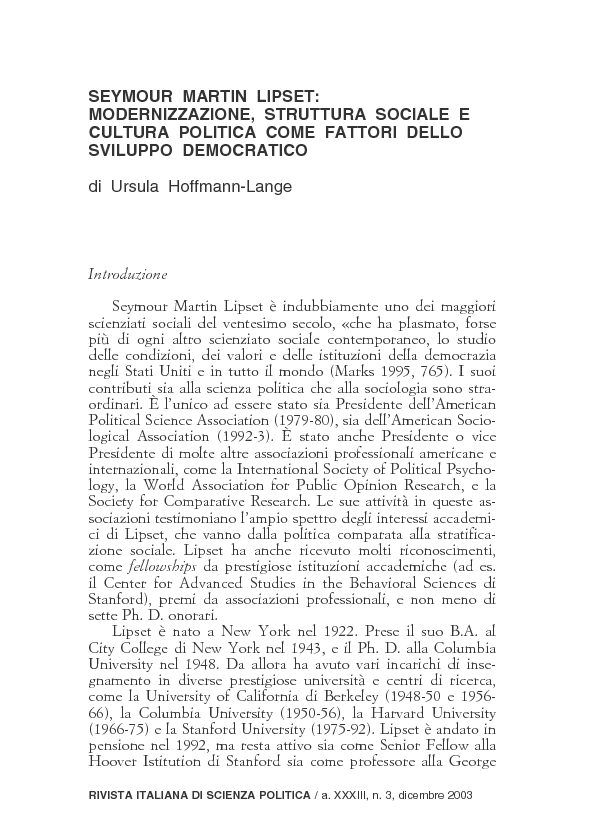