Despite extensive literature on tense-aspect acquisition, little attention has been devoted to African languages. This paper intends to broaden the typological coverage. It also aims at testing three basic issues often mentioned in connection with ATAM (Actionality, Temporality, Aspect, Mood) acquisition: (i) the higher percentage of nouns as opposed to verbs in the early phase of L1 learning; (ii) the late acquisition of future -as opposed to present- and past-referring tenses; (iii) the role of Actionality and Aspect, as often proposed in the specialized literature. Mòoré (a Gur language) is a perfect candidate, due to its morphological properties, in particular its being a definitely Mood/Aspect-prominent language. The results of a longitudinal investigation on 4 children between (approximately) 1;6 and 2;6 show that: (i) the number of verbs overcomes that of nouns in the early phase of acquisition; (ii) the acquisition of the future tense is very precocious; (iii) despite high degree of explicitness of the aspectually-marked Mòoré forms, Aspect does not have the leading role in the acquisition process. It is instead proposed that ATAM acquisition is guided by the degree of semantic and morphophonological transparency: in particular, the children analyzed in the study learned the more transparent forms earlier than some of the aspectually explicit, but morphophonologically more complex ones. 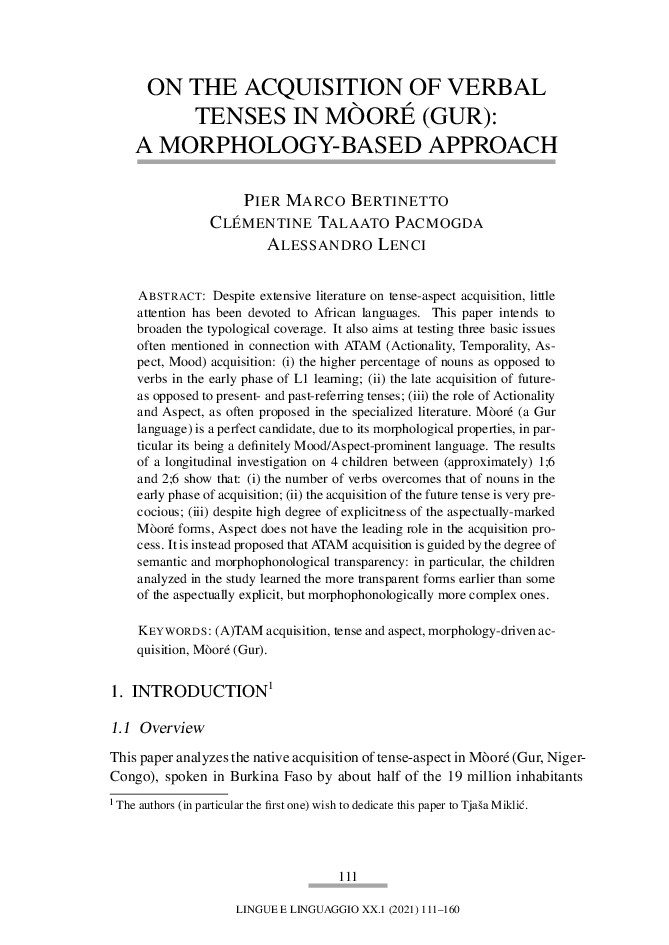