Analyzing Fascism at the grass roots enables us to measure the degree to which Fascism was able to penetrate Italian society and provides evidence of the difficulty into which it ran in implementing Mussolini's total project. Local Governments are examined in respect of the evolving role of the three key institutional roles at the administrative level: namely, the Prefect, the Federal secretary, and the Mayor. There was a close relationship between the local administration, the local élites, and the Nfp. In the first essay, Paolo Varvaro describes the overall ambiguity in the Fascist legislation drawn up to intervene in the workings of civil administration. Support for the Prefect, nominated by Rome, stands in contrast to the belligerence shown by the new political players emerging in these peripheral localities, while the institution of the Fascist Mayoralty (the Podestà) illustrates the intention of the regime to offer some continuity with the existing administration (the "sindaco"). Tommaso Baris analyses the recruitment of political-administrative cadre in the province of Frosinone. At first the appointments are made from the local aristocracy, but from the 1930s the most important grass-roots positions are in fact occupied by members of the middle class, following Nfp doctrine. Finally, Elena Vigilante reveals, in the case of Basilicata, the contradictory outcomes that flowed from the process of centralizing the regime. During the 1930s the number of political leaders nominated by Rome increased, but the power of local parliamentarians to shape the local ruling élite persisted, supplying to it men who were petty and middling bourgeoisie. 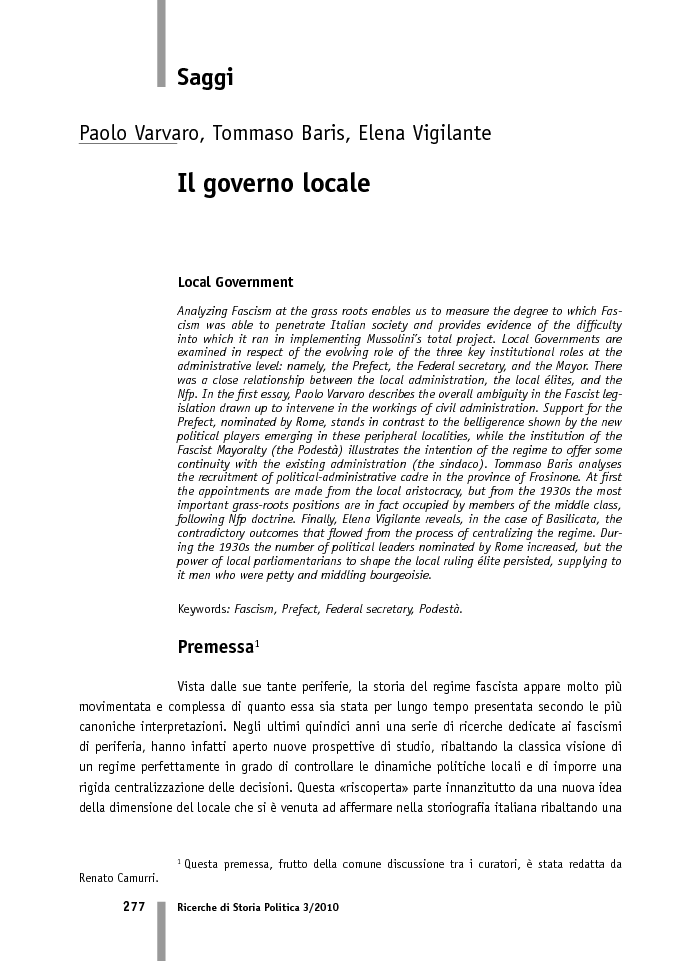