In the eighteenth century the business of maritime insurance was characterized by a continuous trend of growth punctuated by soaring peaks during major wars. This dynamic was reflected in all major European markets, and it helped to consolidate insurance practices among traders, improve the legal and institutional apparatuses of control and transform the organization of the insurance business. A key step in the evolution of the market was the Anglo-French conflict of 1744-48. The general field of maritime insurance was reshaped by the end of the war by three main changes: closer integration between the different national markets, the birth, all over Europe, of joint stock companies, and the emergence of the London market as the main coordination center, to the detriment of Amsterdam. The speculation of the last years of the war substantially contributed to this remodelling. Change was encouraged by high insurance rates and the blockade of French foreign trade - especially in the Atlantic -, but made possible by contractual arrangements that allowed, more or less lawfully, to release a contract from the need to certify an insurable interest, hence turning insurance into a kind of gamble. The speculative bubble triggered by the type of contract named «interest or not interest » or «wager policy», has already been studied from the point of view of the laws passed by the British Parliament to mitigate its potentially destructive effects. This article examines the topic from the point of view of the secondary market of Livorno, in an attempt to shed light on the network of collaborations - or collusions - which transformed the European insurance market into a big gambling house. 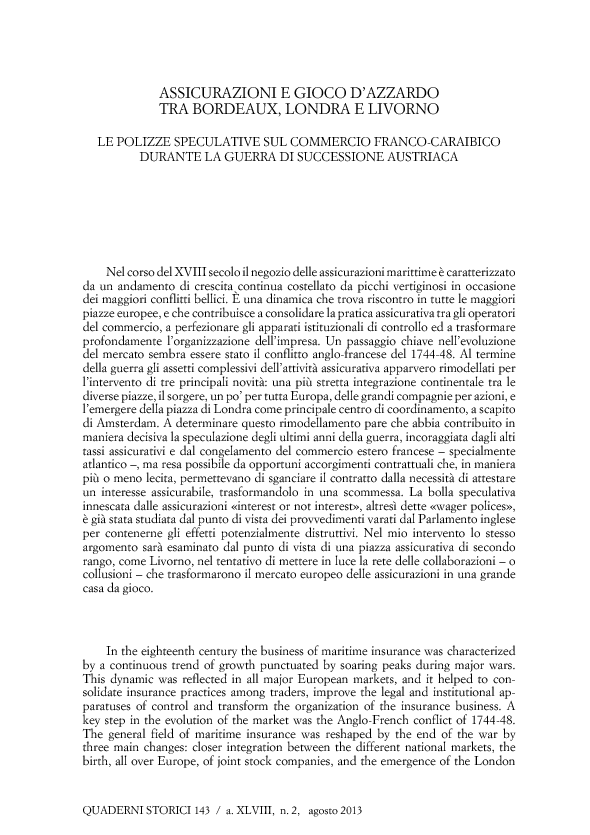