What did it mean to be a foreigner in the Old Regime? Focusing on judicial and diplomatic sources, this essay analyses how the distinction between subjects and foreigners was forged through (and used in) the interaction between immigrant merchants, consuls, judges, and the local government. In the early modern period, the members of many «nations» were exempted from the jurisdiction of ordinary courts. Instead, the lawsuits against them were brought before the nations' own "giudici delegate" (or "jueces conservadores", as they were called in Spain). These judges were paid by the nations themselves and frequently their decisions were influenced by the pressure of the consuls. For the foreign merchants this jurisdictional privilege constituted a precious resource in their interaction with local actors and authorities. Time after time, it allowed them to defy the customs, laws, and the rules of the corporations. This situation changed in the mid-18th century, when the newly- created Supreme Magistracy of Commerce dismantled the "giudici delegati" and submitted foreigners to its own unifying jurisdiction. However, the foreign merchants proved able to manipulate the new court and obtainted a privileged access to its judicial services. This essay claims that, in order to understand the legal construction of the «foreigner» in a given country, we need to look both at inter-institutional dialectics and at international power relations. Above all, we need to conceive immigrants not only as subjects of the law, but also as social actors, who were able to influence the application of existing norms as well as the creation of new ones. 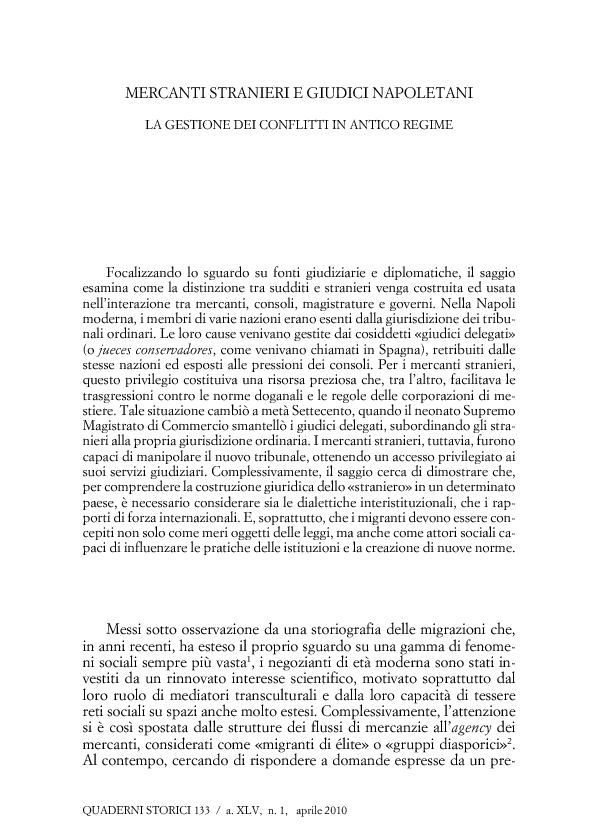