In Italy, the recruitment of academic staff is characterised by a paradox: in its form it is a public competitive examination; in reality, however, winners are predetermined, according to the principle of co-optation. This apparent contradiction is not the product of juridical inefficiency, but the result of political choices. Since Italian unification, the ruling class has tried to dominate the process of cultural and ideological reproduction and the formation of economic elites by thoroughly controlling university recruitment, so as to minimise the risk of outsiders' intrusions. As a result, the history of the «reproduction» of the Italian academia is not a simple sequence of reforms of recruitment systems, but is part of the process of transformation of the role of university in the economy, politics, and society. In this process, the systems of recruitment and career progression of academic staff have adapted to the evolution of university's economic and social objectives and to the changing power relations between political, economic and academic actors. At the same time, however, the mode of recruitment by co-optation has been an important factor of continuity and stability in academic relations. By encouraging the development of corporative interests and privileged relations with politics, co-optation is at the core of the so-called «baronial system». 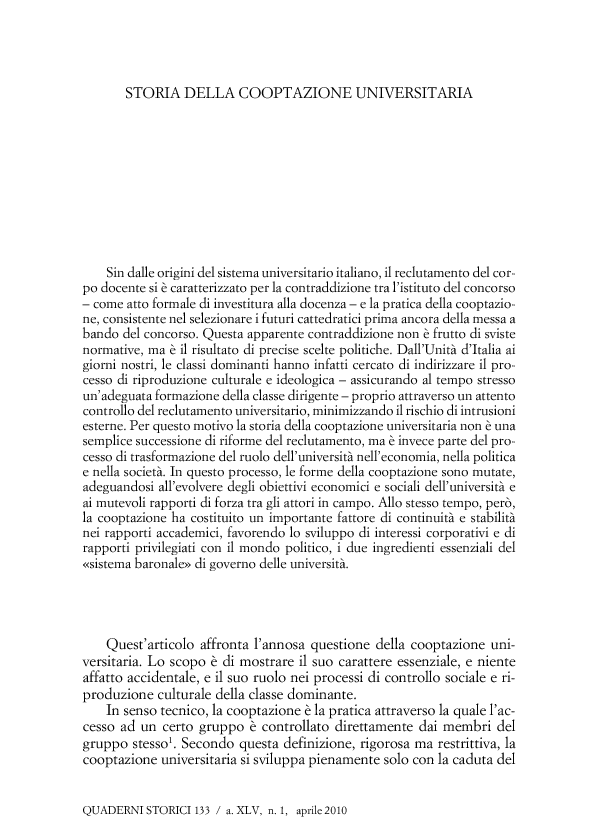