In the seventies, Sardinia experienced an intense political season dedicated largely to the construction of autonomist democracy, to the implementation of rebirth, and to the resolution of the serious economic and social crisis. In the face of such complex problems, the events of the world of labour and trade unions were an exemplary litmus test when, once the model of development by poles had entered a crisis, it was found - alongside the persistence of backwardness and long-standing delays - that new issues, with a strong social, economic and anthropological impact, had come into play, and that drastic changes with a dramatic outcome for workers had taken root. In a context as intricate as ever, the struggles of the Sardinian Cgil looked primarily to the implementation of rebirth and of structural reforms, to the unsolved problems of employment, unemployment and emigration, and more generally to the issue of development in the South. In the dynamism of which it was an expression, the initiatives taken with a view to tradeunion unity and within the United Federation raised particular interest when, having adopted the approach of an intermediate organization between companies and institutions, CGIL was to take on an overall planning action, the keystone of a qualifying relationship with democratic political forces, in order to define a new model of development for the island, to reform the region's institutional structure, and not least, to renew a Sardinian ruling class involved in the drift of corruption. 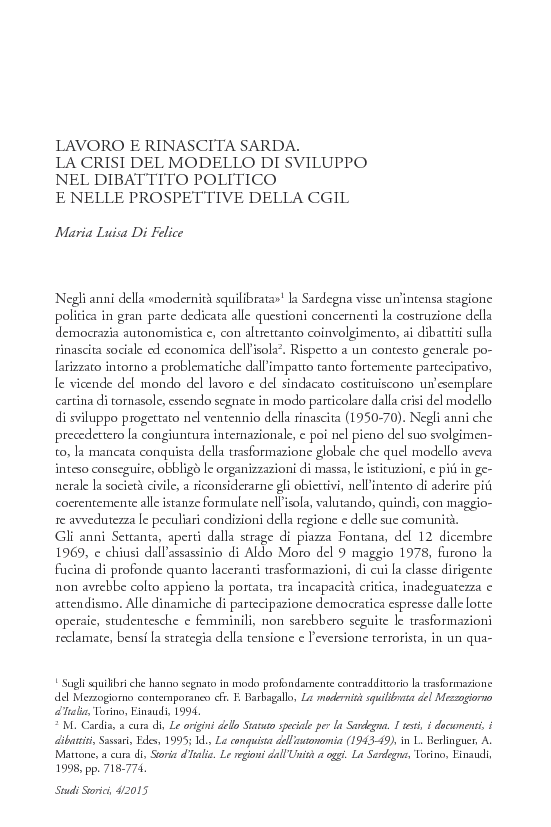