Through first-hand archival sources, cross-checked with traditional archival sources, this essay reconstructs the birth and the first years of Istituto Nazionale Luce under the liberal and enlightened direction of Luciano De Feo (1925-1928). Rising from the ashes of the small "Sindacato di Istruzione Cinematografica" (SIC) founded in Rome in the early 1920s by liberal business journalist Luciano De Feo, 2Istituto Nazionale Luce" was formally established by Mussolini in November 1925 with the purpose of producing documentaries aimed at civil education and national propaganda «through cinematography». The birth of this new institution occurred on the eve of the authoritarian turn of the mid-1920s, to be followed, over the following decade, by totalitarian dictatorship. Before taking on, starting in the autumn of 1928, the direction of the "Istituto internazionale per la cinematografia educative" (ICE), De Feo founded the "Servizio Fotografico" and inaugurated the "Planetarium". During the 1930s, «Luce» newsreels were to be run compulsorily in all Italian cinemas. "Istituto Luce" was destined to become a powerful machine for capturing popularity among Italians, as well as the most relevant audiovisual source for the national collective memory. 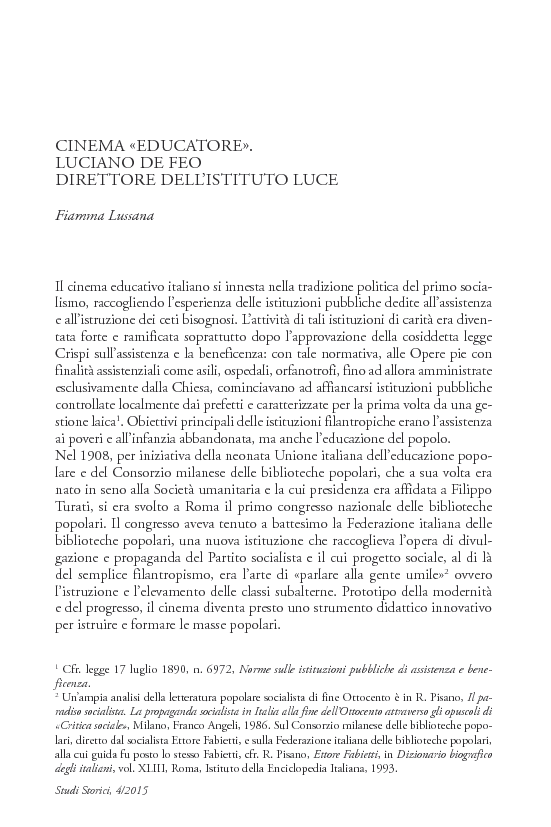