This essay reconstructs the historical debate on the relationship between centre and periphery during the fascist regime. This topic is a highly important one, and is often considered decisive for reading the fascist dictatorship in terms of authoritarianism or, to the contrary, as a totalitarian regime. Italian historiography initially supported the first interpretation. Since the 1950s, the pre-eminence of the Prefect over the federal secretary was read as a victory of state institutions over the party. Similarly, it was thought, upon analysing the first appointments as podestà, that the local power, too, was left in the hands of the representatives of the aristocracy and of the large landowners. This framework, expanded and refined by studies carried out first in the 1960s and then in the 1970s, began to crumble thanks to new research done between the late 1980s and the 1990s. Emilio Gentile's interpretation of fascism as a totalitarian phenomenon has accompanied the innovative analysis arising from the new conception of political history gained by such scholars as Salvatore Lupo, in their encounter with the holdings developed by the Institutes of the Resistance. Fascism then appare as a modernizing phenomenon that could also alter the earlier social and political equilibrium of the province, which was in turn capable of «resisting» the dynamics of centralization. The new generation of historians of «fascism in the provinces» has dedicated its efforts to close examination of the many facets of the new articulation of the relationship between totalitarian centre and resistant periphery. 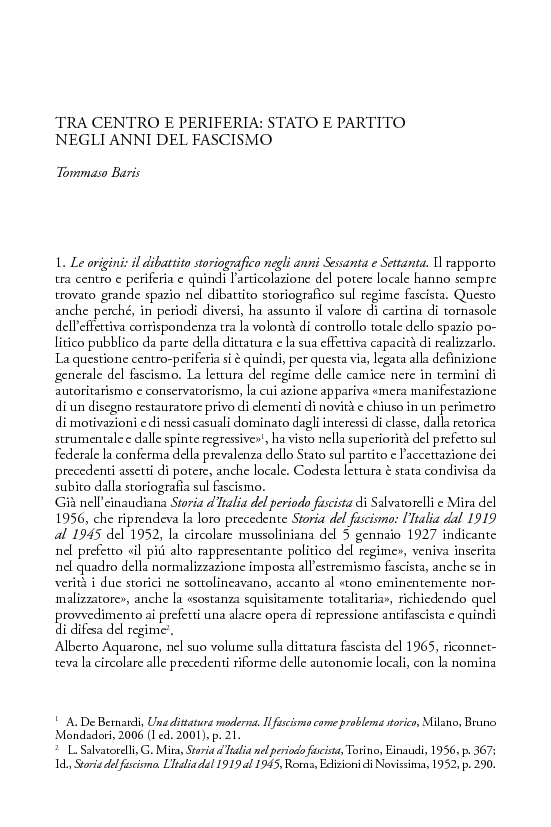