This essay aims to study the contributions of juridical historiography to interpretino the role and position of the PNF (National Fascist Party) in the Italian constitutional system. This is a recent contribution, because juridical historiography - traditionally interested mainly in the Middle Ages) has always been very suspicious of the contemporary age. Given the lack of studies by law historians, many other social sciences have studied fascism and the PNF. In particular, political historiography has produced a pair of opposing interpretations: the first (asserted mostly by Aquarone and Pombeni) describes the PNF as a State organ, namely a party completely subjugated to the State. Conversely, the second interpretation (asserted by Gentile) describes the PNF as a primary builder of the fascist State's architecture. From the point of view of the constitutional historian, these two interpretations do not seem to be necessarily in conflict. Indeed, in the fascist constitutional culture, they coexist. This was because the fascist constitutional culture was not a flat landscape. To the contrary, constitutional science during the fascist regime was characterized by a lively debate. There was an interpretation firmly anchored in the tradition of the so-called «Theories of State», but at the same time, during the 1930s and 1940s, new theories were to arise - the so called «doctrines of constitution», in which the role of the political party (or, a few years later, of «political parties») become different: no longer the State's servant, but a maker, from below, of political unity and Constitution. 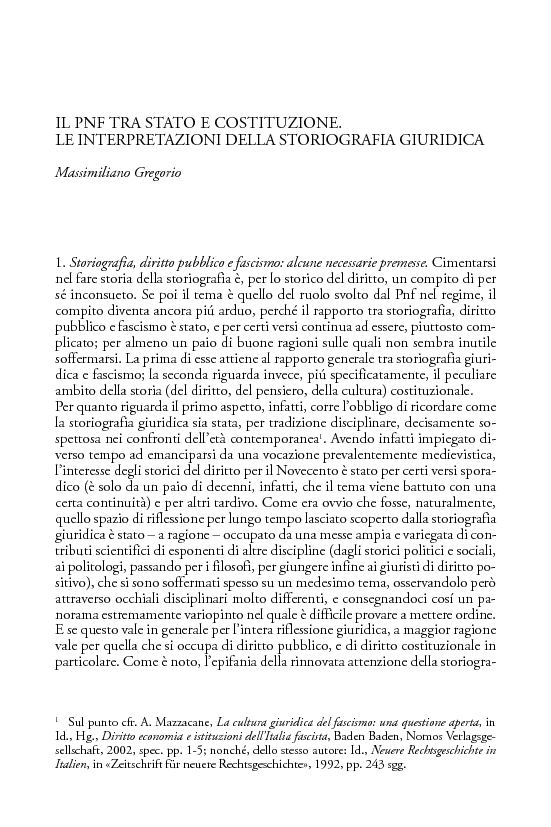