Fabio Rosa (1687-1753) under Benedictus XIV reached the position of computista dei Sacri Palazzi, i.e. accountant of the Pope. Rosa played also a role in the history of art: being son of the academic painter Francesco Rosa, he was highly esteemed for his painting collection. The collection was made of 510 pieces, some hung in via Paolina, some others in a vigna close to Porta Salaria. Quite surprisingly, old masters played a minor role in the ensemble: in fact, most of the pictures were painted by modern masters. Rosa held pictures of history painters such as Carlo Maratti, Benedetto Luti and Francesco Trevisani; his true passion, anyway, lied on classical landscapes and particularly on those by Jan Frans van Bloemen, named Orizzonte. Fabio Rosa's love for classical landscapes reflects Accademia di San Luca's gradual appreciation of the 'genre painting' and of classical landscape itself, which took off in the second half on the XVIIth century and boosted in the first half of the XVIIIth. In fact, Rosa was connected to the Accademia: he was buried in the church of SS. Luca and Martina and left to the Accademia a wide anthology of his picture collection, selected by his friend Placido Costanzi. One might well suppose that his taste and acquisitions were influenced by some members of the Accademia, such as for instance the same Costanzi. Thanks to Fabio Rosa, the Accademia might be looked as Rome's main museum for contemporary art, thus becoming the third centre of a 'museum system' formed also by the Musei Capitolini for antique pieces and the Pinacoteca Capitolina for old masters paintings. This system, probably conceived around 1750 by Silvio Valenti Gonzaga and Giovanni Paolo Panini, gave to the Accademia a key position in the art market. Its effectivness in shaping grand tourists's taste might be revealed in Brownlow Cecil's and Thomas Coke's choices. 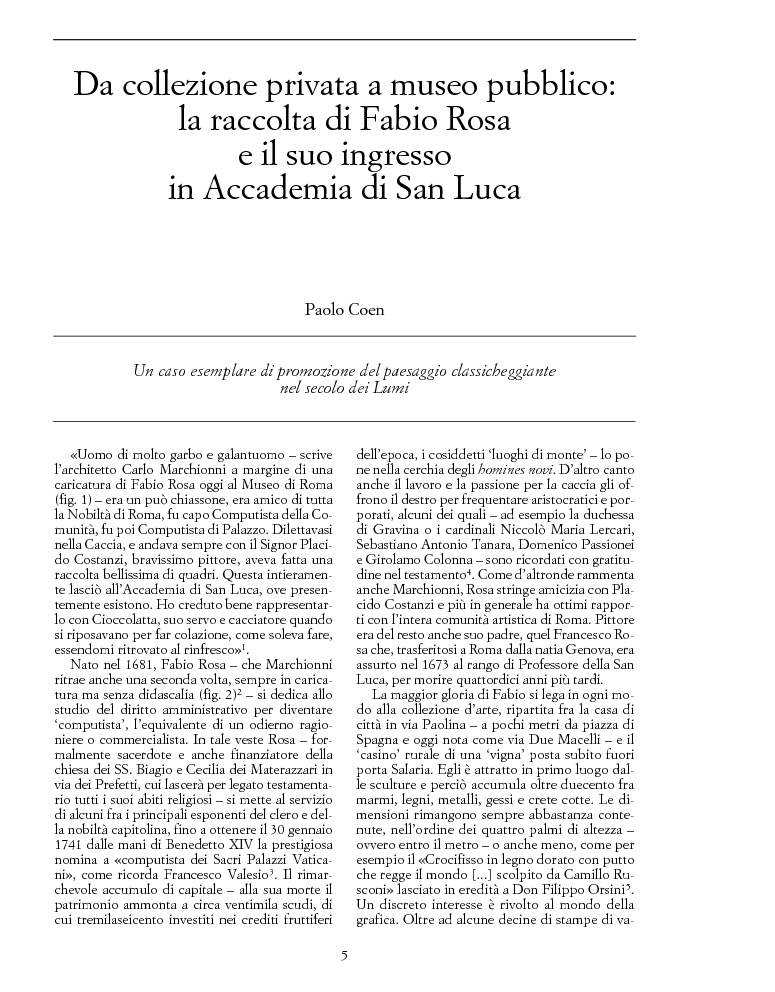