One new feature of Indian millennial fiction is the emergence of adolescent protagonists. This may be explained either as a realistic reflection of a new subculture that is rapidly developing in Millennial India or as a metaphor for a society that has moved beyond the legacy of colonialism but is uncertain as to what path it should take next. Adolescents have always been present in Indian fiction, but their predicament was mostly considered as a passing phase. It is only after the turn of the millennium that adolescents have started to constitute a class. None of the adolescents described in these novels is able to foresee their future and they appear unwilling to move on into adulthood. The economic competition of liberal India is represented through stern parents who compel their children to work excessively hard to achieve success. Such is the case with Neel Mukherjee’s and Aravind Adiga’s novels. Another characteristic of adolescents of New India is that they often resort to “timepassµ, a kind of unproductive way to while away the time in apathy. These characteristics make the protagonists somewhat different from the teenagers described in earlier Indian novels; unlike their forefathers, their paths in life are not clearly defined, and yet they are heavily pressured to do better than the others. The characteristic open psyche of the adolescent suffers under these conditions of pressure and precarity. Furthermore, almost all the adolescents described in these three novels are gay, often in the process of coming to terms with their homosexuality, which enhances their instability in a homologating society. In the three novels here examined the adolescent subject is unable to grow into adulthood and perishes, either literally or metaphorically, as an over-demanding society annihilates his fragile Self. 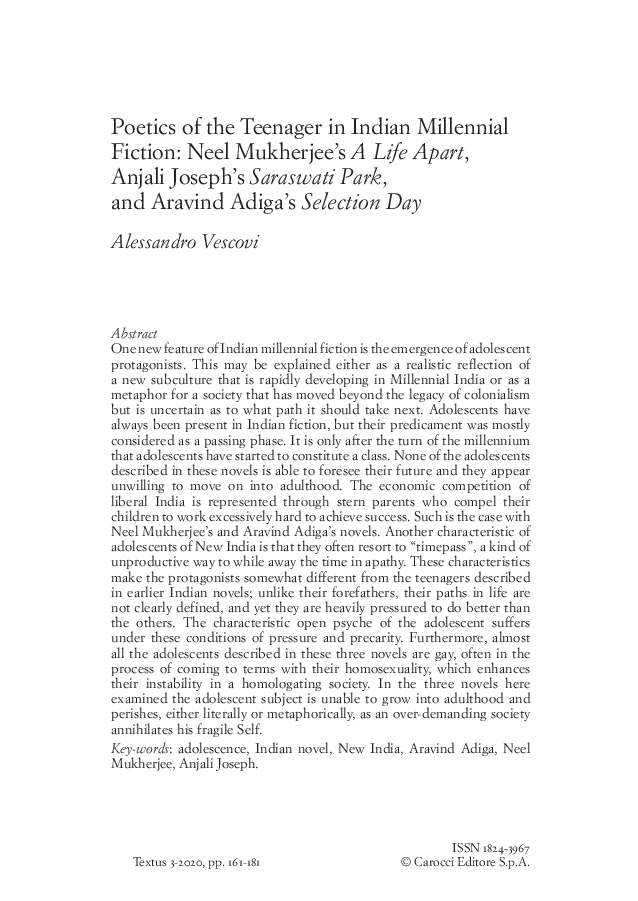