In the nearly eighty years since Laura Riding and Robert Graves ceased their collaborative endeavors there has been much speculation as to the nature and extent of their literary partnership. Graves retold the past to his biographers, constructing Laura Riding as a queen yogi figure. In response to these accusations Riding returned fire with volley after volley of "corrective" letters which she sent to Graves's biographers as well as any magazine or student that she found to be sympathizing with Grave's account of the creative partnership. At the time of her death in 1991, Riding was embroiled in multiple epistolary exchanges of which the primary object was the restoration, perhaps better identified as the recreation, of "Laura Riding". These exchanges with friends, enemies, and editors of little magazines demonstrate her efforts to dispel what she considered incorrect characterizations of her "collaboration", "connection" or "association" with Robert Graves. If we settle too easily into the entrenched positions of the Riding-Graves conflict we put ourselves in danger of continuing to debate Riding's role in terms of a model of authorship that strictly delineates between creation and revision, authors and editors, and which, in turn, demands that Riding's contributions be either credited or discredited. But "collaborators" often do not share the same conception of authorship, nor do they have fixed roles or rigid definitions of their own creative work. This essay reconsiders Robert Graves and Laura Riding's collaborative practice and revision techniques and the ways in which their very different self-archivization practices shaped their reception, first, at the institutional level of the collections, then, through forensic examination of manuscripts, diaries, and correspondence. Anxieties about authorship attribution and reception in the Riding-Graves archives, as they represent an expanded authorial corpus and a record of early twentieth-century collecting practices, demonstrates the ways in which modernist form, composition, revision, and self-fashioning techniques reveal the archive as the modernist scene. 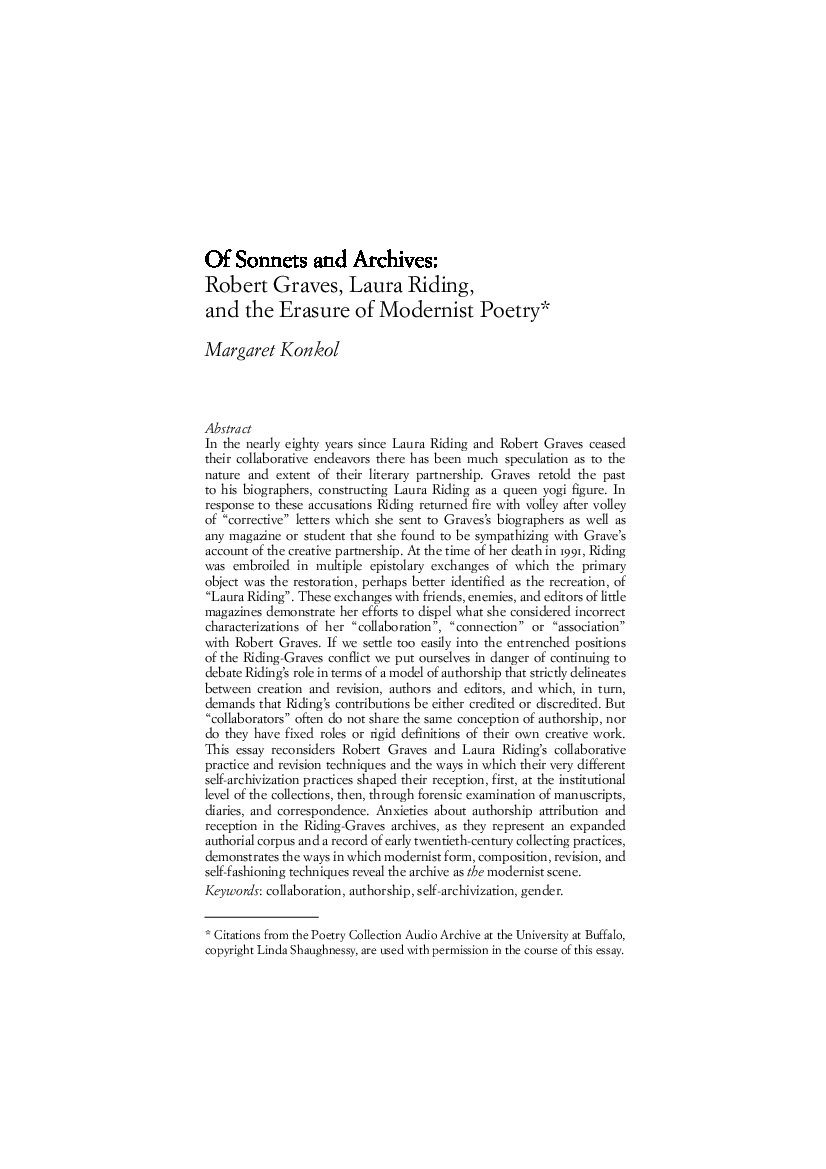