Meditation on the ways in which scientific learning shapes great civilizations and empires also has a strong legacy in the medieval Islamic world, as seen in works by such luminaries as the fourteenth-century Muslim historian Ibn Khaldūn. This paper looks at early Islamic debates on contributions by diverse nations to the evolution of the arts and sciences. Specifically, it reconstructs the lineage of Ibn Khaldūn's ideas by tracing the trajectories of the motif of the seven leading nations of antiquity in the works of al-Mas'ūdī, al-Tawḥīdī, al-Bīrūnī̄, and Ṣā'id al-Andalusī. I argue that these ideas served as a foil to Ibn Khaldūn's ideas on imperial formation and decline and the spread of Islam. Ibn Khaldūn's treatment of the relationship between the rise of and fall of civilizations and the evolution of science represents one of the first systematic and sophisticated approaches to the interplay among science, economy, and politics, yet it has received little scholarly attention. At the same time, Ibn Khaldūn's discussion lends itself to a comparison with the ideas of one of the foundational figures in the comparative study of civilizations in Europe, the seminal sixteenth-century French classical scholar Louis Le Roy. Despite the specific differences between the eras in which Ibn Khaldūn and Le Roy lived and wrote, both writers portray the evolution of scientific knowledge as one of major components of empire-building. Likewise, they both provide valuable insights into the formation of human society, the history of ancient nations, the succession and sequence of empires in the course of human history, as well as into the role of language as one of the key parameters of imperial expansion. 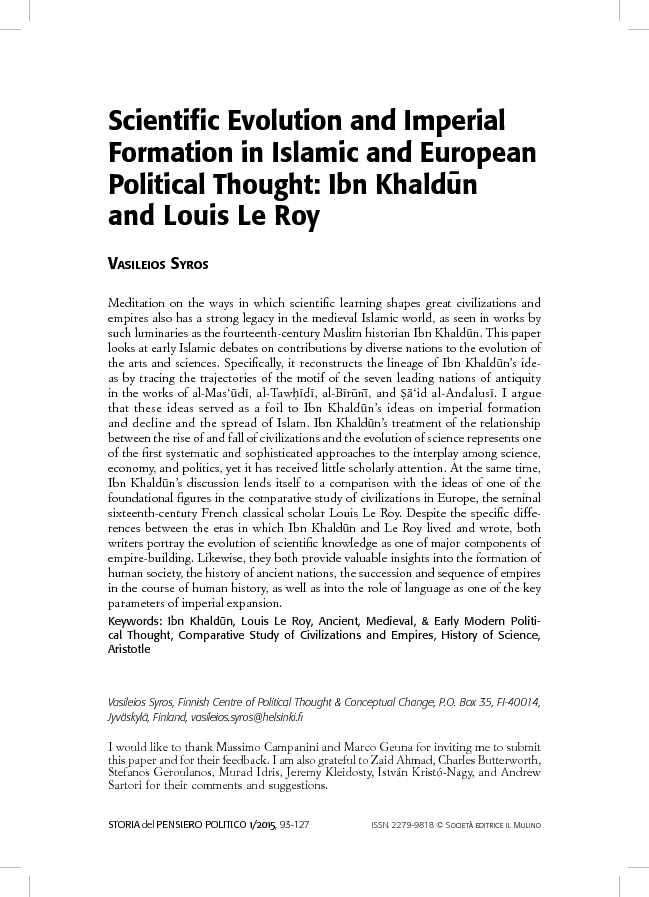