This paper reflects upon the role of EU law principles that have an impact on economical politics and on civil-law relationships. Such principles are arranged by a taxonomy that sets the functional ones (beginning with the principle of effectiveness), which oversee the functioning of the European Union, apart from the substantive ones, which embody EU objectives and are divided into axiological and teleological principles. This grid of principles presides over two levels: the use of civil-law tools and methods in order to expand the EU competences and, more in general, in order to regulate relationships between the European Union and the States; and the aim to obtain general objectives through the discipline of contracts among private parties and, particularly, of consumer contracts. At both levels, the dialectic relation among principles envisions the increasing overcoming of utilitarianism-based neoliberal views by ideals drawn from ordoliberalism. On the one hand, these conceptions suggest the need for the European Union to create conditions such that the States put into effect social policies, through public or mixed interventions. On the other hand, an ordoliberalism based ideology aims to rely on the discipline of contracts for the task to guarantee «access justice» within the market. Though it does not remove social injustices and does not replace necessary public interventions, «access justice» is able to contain that cluster of problems, because of its effectiveness in their prevention. This is a balance point which might contribute to poise axiological principles – protection of social rights included – and teleological ones, and particularly free market, basic freedoms, and the principle of freedom of contract. As a result, the hidden dissension among States and the European Union might be mitigated and the job of principles, far from engendering conflicts, should be the help to build a shared and common identity among European Union and States. 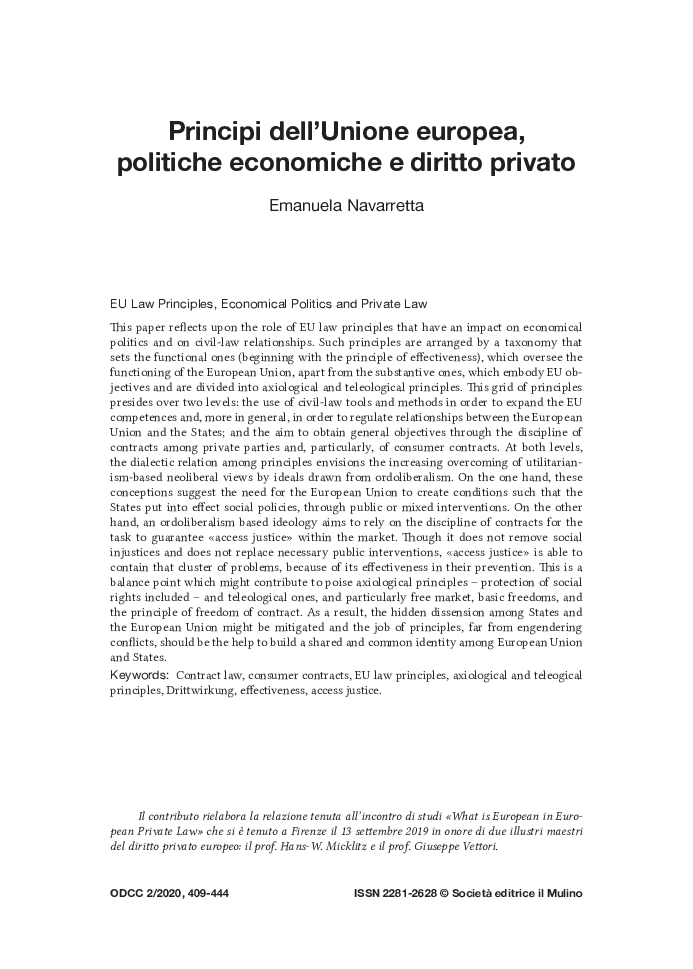