By applying the gender perspective to the concept of Orientalism elaborated by Edward Said the article debates how the Orient is not only a cultural construction, but also a sexual one. This lens is also able to disclose the gender rhetoric through which the Western feminist eye has framed the 'Other Woman' depicting her as bounded by cultural ties. This is well exemplified by the stereotype of the Muslim woman as veiled, victim and powerless. In this sense, the deconstructive strategy and the intersectional approach will fruitfully interact with the vivid experience of some Italian and British Muslim women activists, to show that the agency of Muslim women emerges in different contexts, thus breaking the Western mainstream essentialist perspective. The concept of fluid identity, in particular, will be proposed to analyze and make sense of the processes of identity formation with a focus on the intertwining of religious, gender and political dimensions vis à vis controversial practices such as the veil and arranged marriages. It will be the very voices of these women to challenge and re-signify fundamental principles such as democratic citizenship and personal autonomy creating the basis for a transnational feminism that from the recognition of women specificities and global inequalities proves able to devise shared, more equitable and empowering pathways. 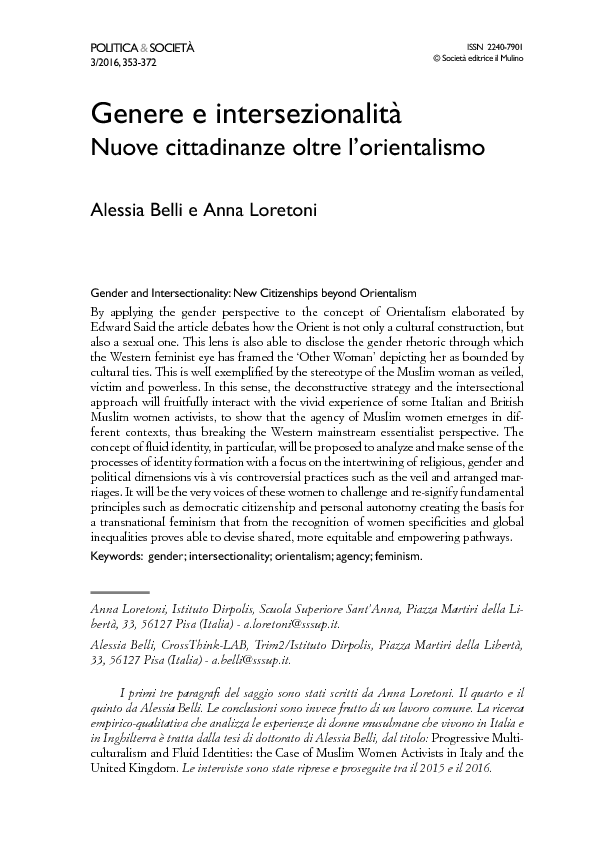