The idea and practice of "social philosophy" began to be used in the Italian academic milieu only in recent years with a delay of several decades if compared to other Western countries. The notion of social philosophy started to be considered in Italy as a concept itself and as an independent field of inquiry only in the late 90's. The first book of collected articles on this theme was published in 2001 with the title "Thinking society. The idea of a social philosophy". Over years social philosophy has been fully recognized in Italy as an epistemologically relevant frame, thanks to specialised studies, courses and conferences. Fifteen years after the first study, the present contribution is aimed at developing further reflections upon the existing relationship between social philosophy, politics, social criticism and public discourse in the light of problems of mutual concern, which seem to require new interpretation apparatuses beside national borders. To this end, the contribution will be divided into three sections: 1. National genealogies of social philosophy. 2. The link between social philosophy and critical theory. 3. Social philosophy and global public discourse. In the conclusions, the inter-disciplinary and trans-cultural validity of social philosophy will be stressed as well as its capacity to overcome a monolithic idea of philosophy, as a strictly academic discipline will be enlightened. Social philosophy is not only focussed on the understanding of pathologies but to the conceptualisation of potentials for change. It has both critical and pragmatic features, aimed at transforming distorted relationships in the both public domain and private sphere. 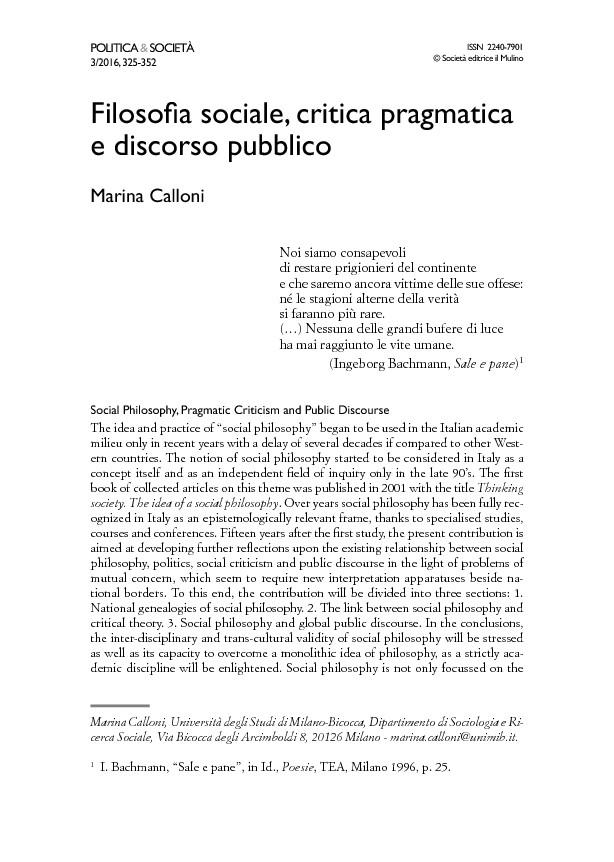