After Snowden's revelations about online mass surveillance activities led by some government agencies, a number of parliaments all over the world have embraced a process of legal formalisation of Internet-related rights and principles. This is the case, for instance, of the Brazilian «Marco Civil da Internet», the Magna Carta for Philippine Internet Freedom, the New Zealand's Internet Rights and Freedoms Bill, and the Italian «Internet Bill of Rights». One common feature of these parliamentary initiatives is their open drafting process involving, in multiple forms, stakeholders, experts and Internet users through online public consultations. The aim of this article is to analyse the online media representation of this initiative and to assess, in a specific empirical case, the contribution of the networked communication to a participatory political process. It considers the Italian case, the first European one to complete the legal formalisation procedure. Authors explore how the Internet Bill of Rights has been communicated online, whether a networked public sphere has emerged around it, and what kind of public debate it has stimulated in digital media. In order to evaluate whether and the extent to which the Internet has provided an alternative arena for public discourse, political debate and mobilisation, three sets of digital objects have been collected within as much device-specific web-spheres: Google News, Twitter and mainstream online newspapers. Both content analysis and link analysis have been used to map actors, issues and their discursive relationships. Findings suggest that, notwithstanding the efforts to involve the public in the debate on digital rights, a dense networked public sphere did not emerge. Moreover, the online communication about the Bill of Rights was affected by a celebratory, depoliticised, and uncritical approach focusing on institutional events rather than on participation. 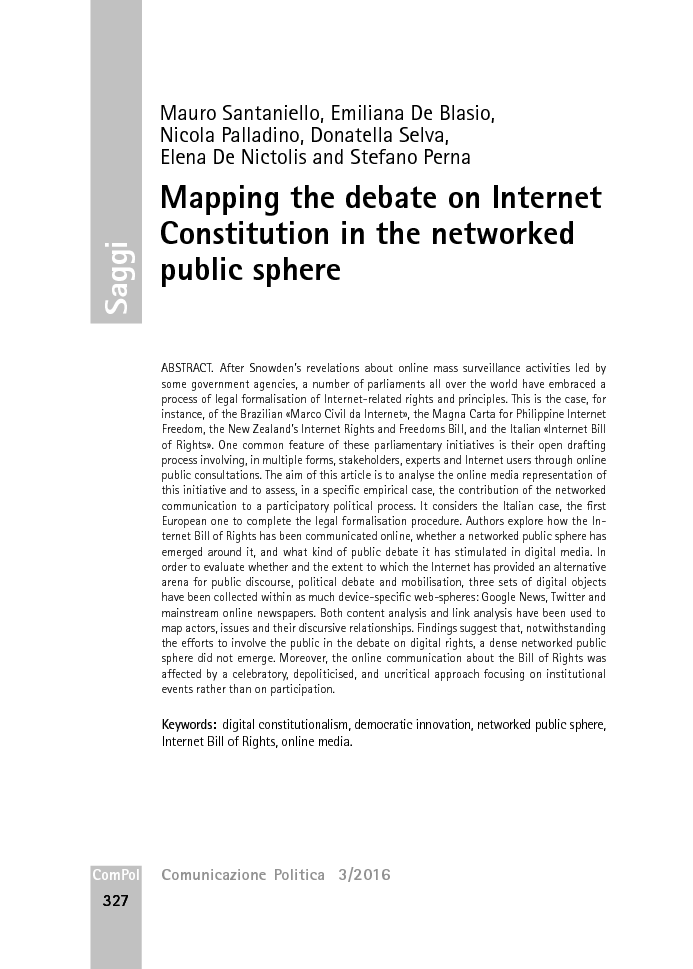