The mediatization of politics was a distinctive feature of Berlusconi's 20 years in politics. It profoundly influenced all actors struggling to make their voices heard in the public sphere: not only institutional ones but also social movements that use to protest as their main political resource. Unconventional collective action has become more and more spectacular and increasingly oriented towards media exposure. If mediatization becomes a dominant aspect of protest, it also opens up contradictions within movements, which by their nature tend to be organized through horizontal structures. These conflicts are sometimes solved recurring to top-down structures designed to exert iron control of communication circulating in the public sphere, to the detriment of debate and internal democracy. In the hyper-real show of Italian democracy in which even social movements fight for a leading role, the advent and spread of new media afford original paths to overcome such risks, but at the same time is likely to exacerbate them. This article observes on the evolution of Italian social movements in the last two decades in light of the processes of mediatization, popularization and personalization of politics. It focuses in particular on the protest cycles that arose against Berlusconi's centre-right governments, paying particular attention to three specific moments: between 2001 and 2006, between 2008 and 2011, and the appearance of the Movimento 5 Stelle. The diachronic analysis and comparison between the movements of the early 2000s and those that surfaced during the recent economic crisis will allow depict the emerging characters of collective action in light of the most recent technological developments. 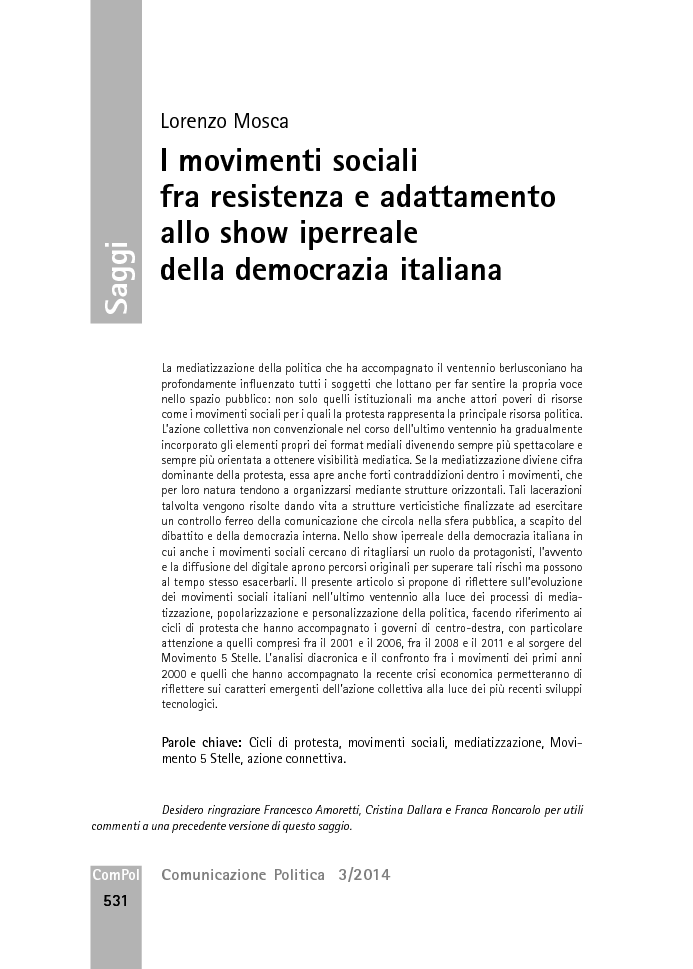