A new political entity has been brought to the fore by the local elections in 2012 and the 2013 campaign for the National elections: the Beppe Grillo's M5S, which stands for «Movimento 5 Stelle» (5 Star Movement). For political scientists and content analysts, the main house organ of the Movement - the beppegrillo.it blog - is an invaluable source of information, yet very poorly explored at the moment. This paper draws upon an intense content analysis (based on both statistical and qualitative techniques) of a large set of documents, consisting of a "corpus" generated from the comments to the 53 «Political Messages», posted by Grillo between 2008 and 2012, by selecting 100 comments per post on the basis of votes from blog users (N = 1.964). The aims of this study are twofold, it explores the thematic universe of the Movimento, as in its grassroots version; the data delivered to answer the first question generated a second one which is inscribed within the debate «movement-institution». We show, on the one hand, that the first requests to structure and make the M5S independent from its founder are coeval to the genesis of the new political subject, hence clearly older than the interest that the media, politicians and analysts recently presented as a new phenomenon. On the other hand, we demonstrate that as early as the pre-parliamentary age, the relationship between the semantic universe associated with Grillo and that inherent in the M5S has evolved in terms of a constant removal, revealing evident tensions and fractures between the leader and its creature. 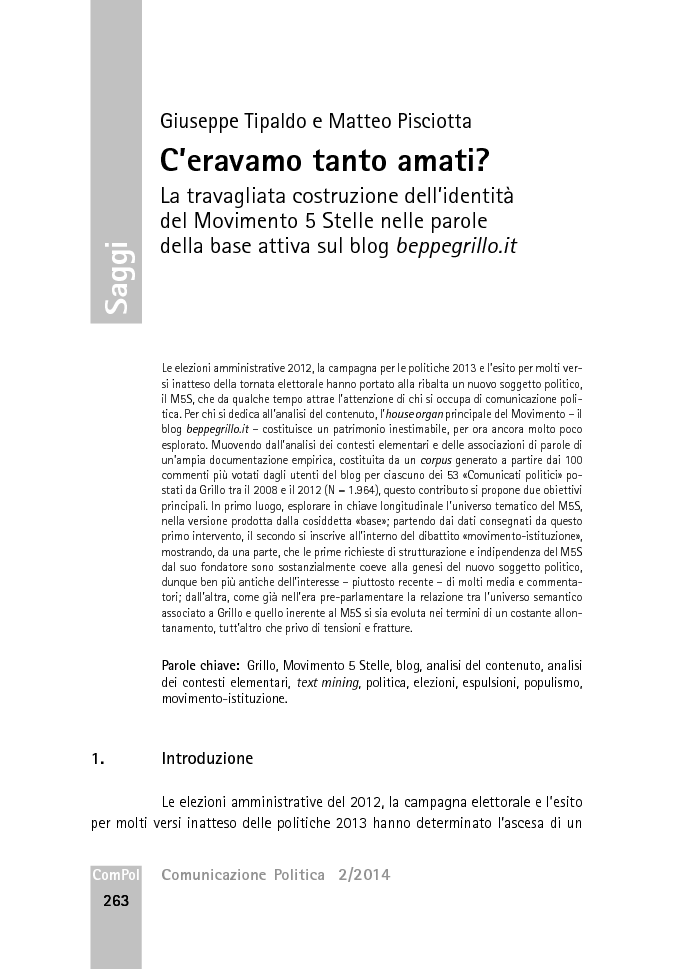