Based on the methodology practiced by Paolo Rossi, the present essay reconstructs the history of an idea: development of Freud’s interest in archaeology, particularly Cretan archaeology. An interest that turns out to be born to justify his cultural passions, from mythology, to Homer, to the tragedians, on which he built Psychoanalysis. Freud’s belief that Psychoanalysis digs up man’s past in the same way that archaeology digs up mankind’s past, is examined within the debate dating back over a century. The Freud’s collection of antiquities reflected his own Eastern-Mediterranean origins, and reveals how he got suggestions from the study in the ancient Cretan civilizations, in the same way as he got suggestions from the mythology. The rediscovered myth of Minos was useful for Freud particularly in his «historic novel» The Man Moses, and suggested the idea of an archaic mother goddess. Furthormore, the «metaphysical pathos» – a concept defined by Lovejoy, founder of the History of Ideas – can be considered a characteristic of Freud’s figure and thought, and probably had its importance in the involvement of his pupils and patients in the interest in archaeology. Finally, we will assume that Freud’s mistrust of the merits of Arthur Evans was generated by the same sentiment that led J.G. Frazer to a preconceived distrust of Freud himself 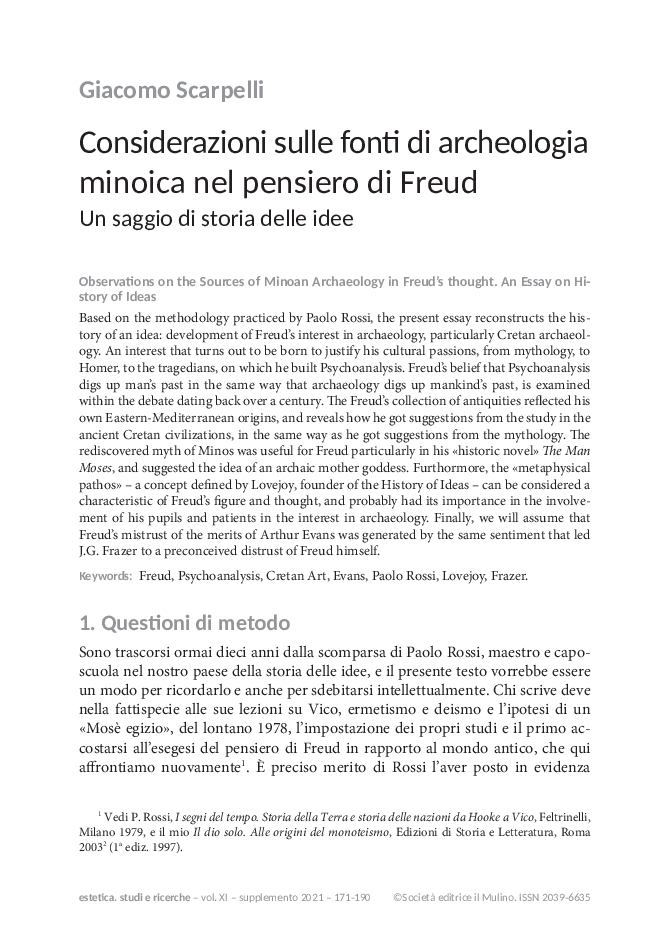