Neurofibromatosis is one of the most common genetic diseases in a man. It is part of neurocutaneous diseases, which affect both neurological and cutaneous systems. The most common neurological complications of neurofibromatosis type 1 (NF1) in childhood are learning disabilities (LD) which occur in 40-60% of affected subjects. Despite this high frequency, many aspects of LD and psychological development are still not well defined. The aim of this work is to investigate the general cognitive profile (IQ), the language, memory, attention, skills of visual-spatial, the behavior and the psychological problems of children (4-14 years) affected with NF1 and their first degree relatives enrolled in a regional registry of neurofibromatosis in Northern East Italy. Excluded from the study are children with mental retardation (IQ ± 70) or major central nervous anomalies. Study sample included 25 NF1 children (mean age 7 years and 9 months), their parents and 11 unaffected sibs (mean 8 years end 7 months). The tests used for NF1 subjects and their unaffected sibs (control group) are the following: - IQ: Wechsler Scales: WPPSI and WISC-R - Memory: Rey Complexe Figure (A and B), Digit Span of WISC-R - Visual-Spatial: Bender Test, JLO (Judgment of Line Orientation) - Behavior and Psychological: CDI (Children Depression Inventory). The tests applied to their parents are: - IQ: Wechsler Scale: WAIS - Memory: Rey Complexe Figure (A), Digit Span of WAIS - Visual-Spatial: JLO (Judgment of Line Orientation) - Behavior and Psychological: PIC (Personality Inventory of Children), STAI-Y (State-Trait Anxiety Inventory) and the questionary about LD In our study the mean of the full scale intelligence quotient (FSIQ) is normal in NF1 children. No association was found between IQ and clinical severity or the presence of areas of increased signal intensity on T2 weighted images (UBO's or Unidentified Bright Objects). Visual-spatial abilities and memory had a weaker score than other competences. Personality inventories showed a normal cognitive and behavioral profile. Depressive traits were not found in children with NF1. Their parents did not show any trace of anxiety. 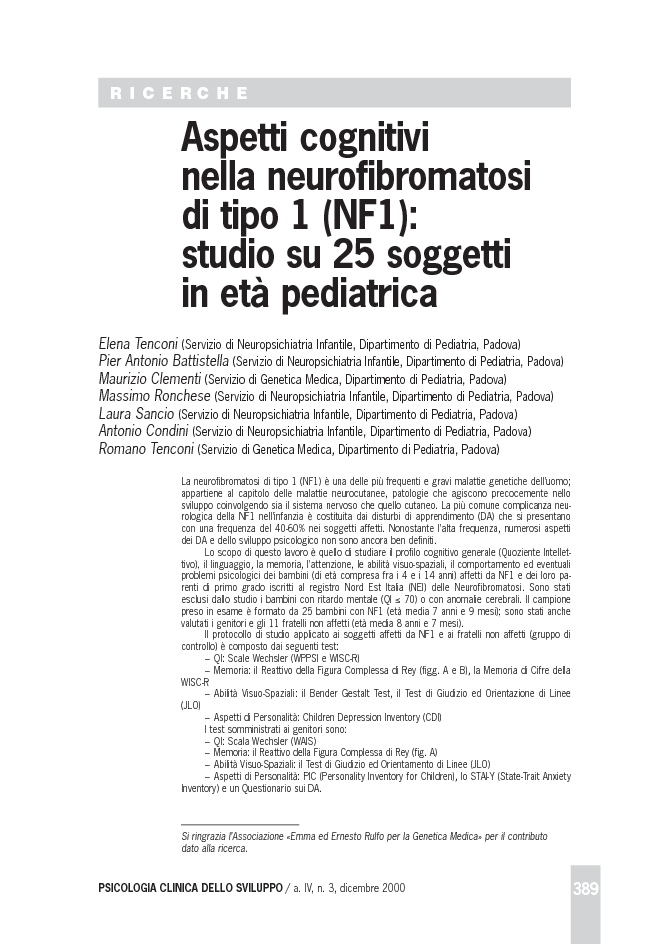