The aim of this article is to analyse the financial aspects of the asymmetric regionalism recently requested in Italy by Lombardy, Veneto and Emilia-Romagna, according to the art 116, third comma, of the Italian Constitution. The analysis is based on the only (semi-)official documents that have been made available up to now: the Preliminary Agreements signed in February 2018 and Title I of the Agreements drafts signed in February 2019. It is pointed out that any quantification of the financial effects of devolution is postponed to dpcms (decrees of the Council President), to be issued after the final approbation of the Agreements, without any control by the Parliament, the President of the Republic or the Constitutional Court. Moreover, financing of the devolved functions is not coordinated with the normative framework for the implementation of Article 119 of the Constitution, which is still far from settled. Overall, the main purpose seems to be guaranteeing to the Regions interested in the asymmetric devolution that there will not be any decrease in their resources; on the contrary, an increase in resources is plausible in the medium term. Given the constraint of no charges for public finances, this can only result in a redistribution of resources from the weaker territories to the richer ones. There is then a real risk of a «secession of the rich», which originates from the idea that the regions with higher «fiscal residual» must be recognized the right to enjoy to a greater extent the fiscal resources from their territory, and the larger the number of devolved functions, the greater the risk. 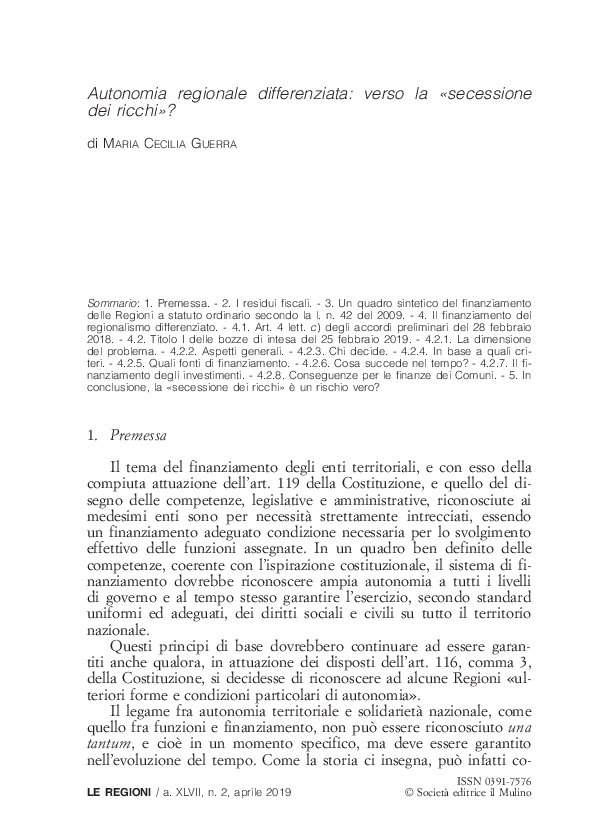