At the beginning of the 21st century, temporary migrant workers programmes (TMWPs) have emerged and expanded in numerous advanced industrialised, liberal states. Advocates of contemporary TMWPs argue that 'carefully designed' schemes can deliver so-called 'triple wins' for host countries, home countries and migrants and their families. Yet, the case for 'new and improved' TMWPs is not without critics, who maintain that such schemes remain highly exploitative. This paper probes into the ethical underpinnings of the regulatory design of TMWPs in liberal democratic states, with a focus on the most problematic restrictions of migrants' employment and social rights under such schemes. Scholars from different disciplines have sought to justify and propose 'well-designed' TMWPs that address, to varying extent, concerns over these restrictions on migrants' rights. In reviewing and critiquing a number of notable proposals, this paper puts forward the discourse of 'exit and voice' in migrants' work relations as a normative foundation for redesigning the key features of current TMWPs. Expanding the contours for exit in migrants' work relations is essential for them to engage freely in the host state's labour market as well as to facilitate their broader life plans emerging from their migration project. Access to effective voice mechanisms can provide a bulwark against exploitation, especially through collective empowerment and mobilisation. 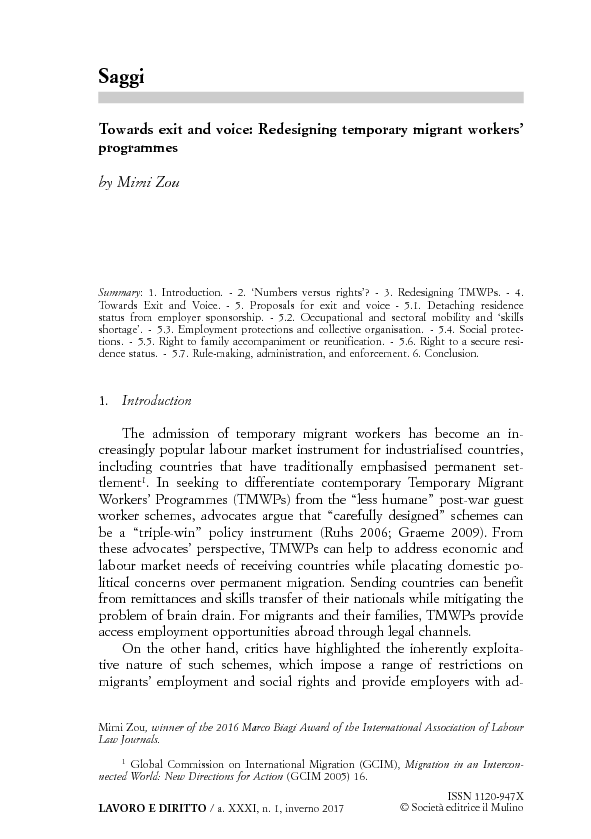