Migration constitutes the myth at the base of Islam foundation and hijra has always played a central role in the islamic thought. Even if the minority condition of Muslims was not a novelty in history, the massive migration of millions of them towards Europe, since the end of the Second World War, put jurists in front of new conceptual challenges to tackle. How islamic identity can be preserved in the new and changing context? To which extent the traditional category of the da’wa can be reinterpreted and adapted in order to expand the new islamic community? In this perspective, the «Fiqh al-Aqalliyyāt al-Muslima» is a collection of jurisprudential decisions and methodologies, that analyses the legitimacy of islamic voluntary migration towards the West and approaches issues related to Muslims western life-style, such as the conduct in the public life, marriage, food precepts and trade negotiations rules. This «jurisprudence of minorities» has its roots in the classical Islamic legal tradition and tries to solve dilemmas, which were not faced in the past. According to the different approaches, there are conservative, traditional and progressive perspectives on «fiqh alaqaliat», defending a more or less pragmatic conception of «Euro-islam», which stresses, or not, the importance of new da’wa to improve proselitysm in Europe. In this context, the Islamic States in search of the «monopoly on interpretations», exercise a soft power to affirm their leadership and their vision of Islam. Among the most used instruments are the construction of mosques and cultural centres; the sending of imams and mufti and their sustenance; the financing of sports and philanthropic organizations; the deallocation of financial intermediaries. Therefore, indirect, polymorphic and chameleon-like proselytism is carried out, which affects the lives of western Muslims at 360 degrees. Finally, the essay investigates the extreme forms of proselytizing imposed by force to local communities in some European lands, where phenomena of «sharīʿa police» aim at tracing areas of Shariatic government in open conflict with national laws and constitutional principles of Western contexts. 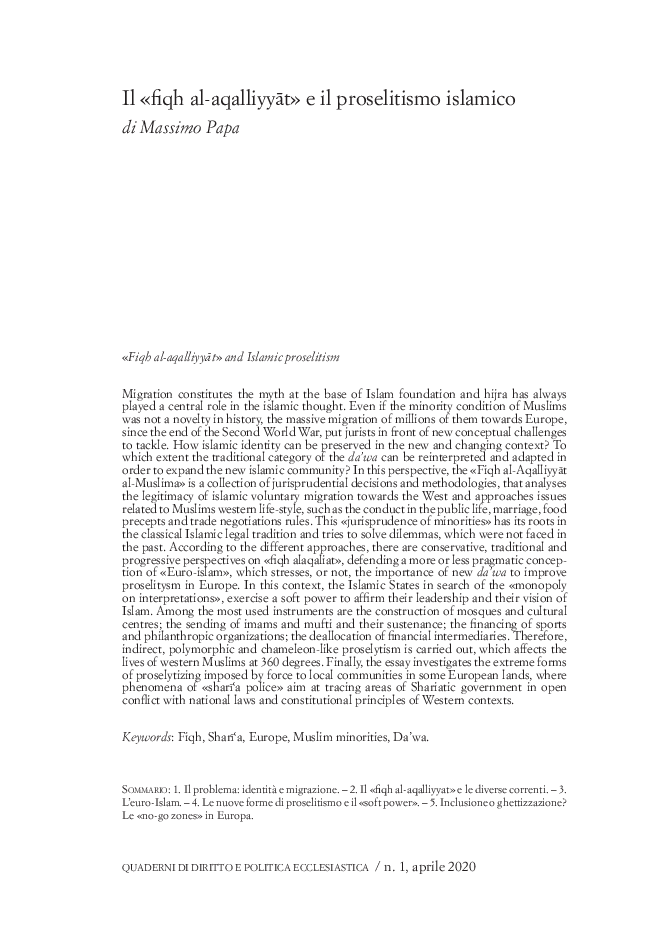