Managerial accountability has been introduced in relatively recent times in our system, and in any case it was only with the reforms involving the organisation of public affairs in the 1990s that the principle has become an inescapable feature of our system. It in fact serves to verify whether the activity brought into being by managers is effectively consonant with political directions received and at the same time whether the expected results have been achieved. The absence of controls over the activity of managers and the consequent absence of effective managerial accountability instead lead to a 'self-referen-tial' bureaucracy. This is the context of Law 145 of 2002 on the reform of management. In analysing this law scholarly attention has focused on the aspect having to do with the possible vulnus to the impartiality of the manager caused by the accentuation of the fiduciary nature of the appointments. In contrast, the aspect in relation to the effective loss of managerial accountability has been less explored. The automatic termination of those holding managerial positions with a change in government and the reduced length of the time of government in office immediately produces a lessening of managerial accountability. This outcome is deleterious not so much to the manager as to the community at large since the only device capable of punishing the failures of an administration in its role of serving the general public falls by the wayside. The devaluation of managerial accountability also emerges from recent administrative jurisprudence, which tends to view the termination of those holding managerial positions in the public administration with every change in government as a sort of presumption of 'technical unfaithfulness' unlinked to any evaluation concerning the performance of a given manager. There are two possible ways of reading the effects that this law has produced on our system. First, one might opine that the law, by putting an effective end to managerial accountability, has produced a violation of democratic principles: as a matter of fact, the one device able to verify whether administrative activity overall is in line with goals set in the political seat falls by the wayside, as does the possibility to verify the results achieved by the administration in fulfilling its role of public servant. A second, quite different interpretation of the law might be that it has produced an 'absorption' of managerial accountability by political accountability: in other words, what might be involved is a return (albeit in 'mild' form) to the hierarchical model. However, even such a return to the past is accompanied by doubts as to its constitutionality due to the proven inefficaciousness of the mechanisms of political accountability - which is merely formal anyway - to assure an effective, impartial and adequate administration in terms of meeting the needs of the collectivity. 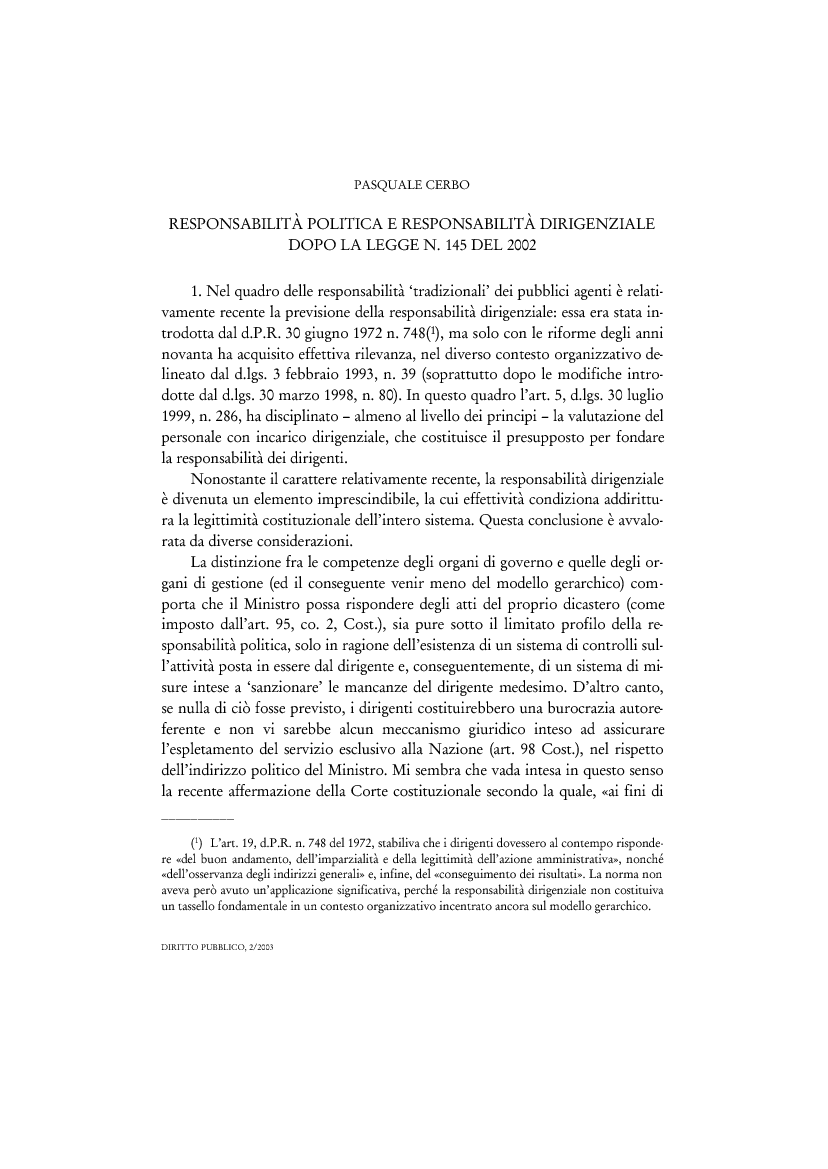