The author examines the matter of parliamentary powers not subject to review in light of constitutional jurisprudence. The provisions concerning immunity contained in Art. 68, Par. 1 of the Constitution form the nexus of relations between political organs and judges, as well as revealing interesting facts about the functioning of Parliament. Those in politics operate on a daily basis with the mass media and in fact live by the mass media. This intermingling underlies the widespread practice that the Chambers of Parliament have imposed so that an opinion expressed by a Member of Parliament that is part of the political debate and therefore not of a 'private' nature is considered as pertaining to the sphere protected as a prerogative. This interpretation has been contested by a large part of ordinary jurisprudence using formal arguments (namely, that the connection with «the exercise of their functions», required under Art. 68, Par. 1 of the Constitution, would thus become a dead letter) and by making the substantive point that the extension of constitutional guarantees to opinions unrelated to the exercise of typified functions would jeopardise the jurisdictional protection of the offended party without a chance for the filtering devices outside the Chambers to be activated, as provided by parliamentary regulations. Also, the gap between the legal status of citizens who happen to be Members of Parliament and other citizens who engage in politics would widen. This explains the conflicts over attribution and the entry of the Constitutional Court into an area, which many believed, was precluded to it. Through an examination of select profiles of constitutional jurisprudence the author evidences certain data that are a sign of the difficulty experienced by constitutional jurisprudence and reveal the limits and contradictions of an 'enrichment' in via pretoria (through rulings by lower court judges) of judgement passed on the conflict between powers, which cannot be used - as the Court itself cautions - as a general instrument for the safeguarding of rights in addition to the safeguards provided by the jurisdictional system. Remaining tensions over the issue of prerogatives affect the broad picture of relations between the Constitutional Court and the Parliament under the recent majority electoral system (which has replaced the proportional system). Proof thereof is to be found in the orientation of jurisprudence and the praxis that has gained a hold in the Chambers of Parliament. Particular importance has been attached to both developments inasmuch as the constitutional design as written lives by precedent: it is the «law on a case-by-case basis» that animates the institutional machine. Some problems have been resolved because of the praxis. But the differences in interpretation between the Parliament and the Constitutional Court are still an open question, which will be difficult to resolve with the norms for the implementation of Art. 68 of the Constitution, which might be an occasion for touching off a review of constitutionality. The question then arises about the possible effects on both the praxis and Italian jurisprudence of the pronouncements of the European Court of Human Rights, which objectively strengthen the position of the national Constitutional Court in safeguarding the private subject's right to honour and reputation. Such pronouncements again pose the question of the proportionate ('reasonable') use of the prerogative, prefiguring a novel plurality of levels in the matter of jurisdictional protection. Furthermore, the author himself observes how the rulings of the European Court in Strasbourg might provide impetus to a jurisprudential approach attentive to the actual case at hand: control over whether the means employed are proportionate to the end pursued would make it possible to not renounce a certain amount of flexibility in passing judgement. In any event, involved here is a road leading to the relinquishing of a dogma: the absolute nature of parliamentary immunity as an institution. 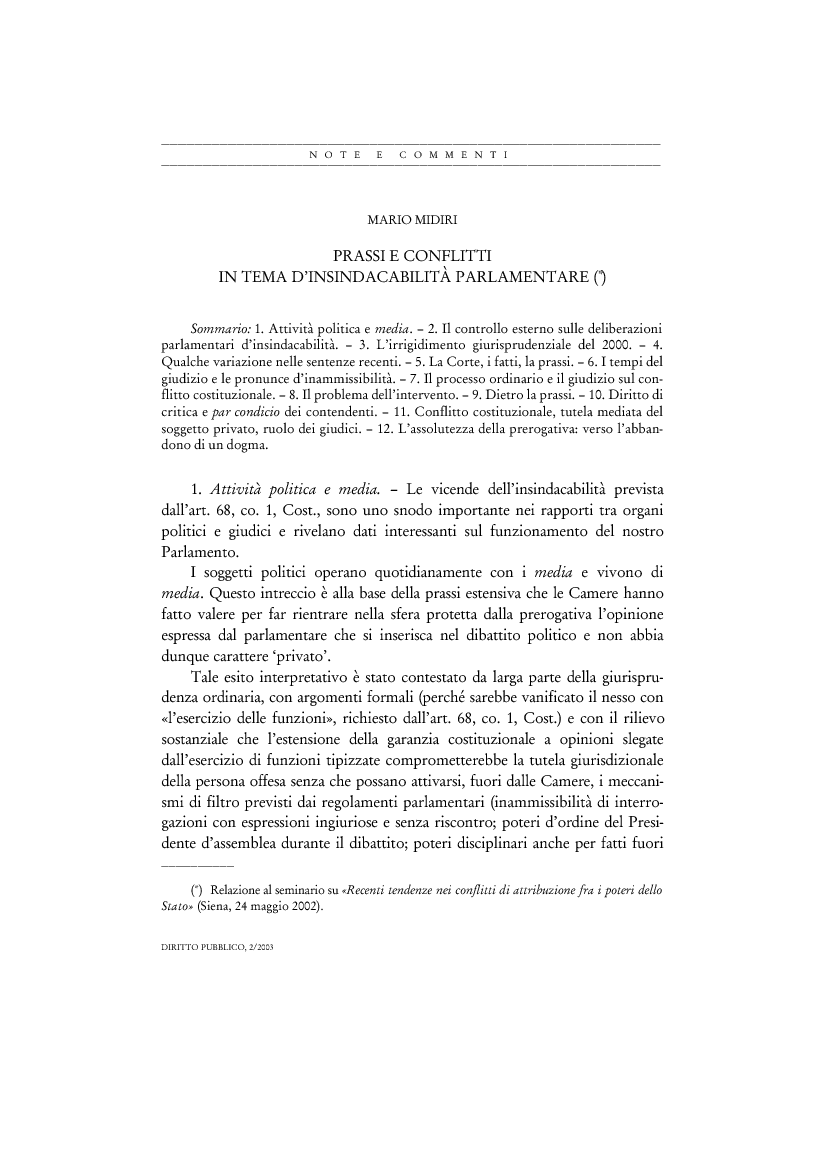