The paper explains why the latest Italian provisions on foreigners are unconstitutional. The new entry and residence restrictions violate both fundamental rights and the system of law sources; on the other hand, they fail in guaranteeing security as well as in providing effective rules for immigration. Firstly, constitutional, international and European guarantees on the legal status of foreigners seem to be intrinsically weak in the short term. On one hand, excluding foreigners from the electorate stresses the democratic principle and may endanger also the personalist principle; that could foster the adoption of rules which restrict those guarantees, just aiming to reassure those voters who perceive immigration as a treat to their own security. On the other hand, according to the Constitutional Court security itself is a value that the legislator must take into account in regulating immigration outside the field of fundamental rights of foreigners, albeit with many limits, and such legislator’s choices on entry and residence must respect the only limit of not being manifestly unreasonable. However, the very meaning of the Law is at stake when unlawful, inconsistent or ineffective rules, adopted by an unconstitutional or exceptional use of certain sources of law, follow one another: those rules aim to regulate migration, even if migration is an ordinary phenomenon with objective characteristics that must be taken in account by lawmakers and that aren’t avoidable even if border controls and the right of asylum are both outsourced. The paper focuses on the inability of European countries to adopt in EU a common and effective regulation of migration: in the absence of such common regulation, each country responds with the illusion of restore his borders and his full sovereignty, to the extent of barring his ports, disposing refusals of entry and even at the point that Parliament legitimate illegal physical oppression of personal freedom made by government authorities. Another problem is the practice of avoiding parliamentary control on foreign policy regarding agreements on migration, including those with Libyan authorities. The paper also recalls that the recent repeal of the permit for humanitarian reasons isn’t retroactive and doesn’t erase in any way the need to guarantee full protection to the right of asylum on the basis of constitutional and international obligations. After recalling other recently introduced legislations which aim at narrowing further fundamental rights, it’s pointed out that it’s necessary to respect the Constitution again in order to shape a rational and forward-looking regulation of both immigration and the right of asylum. 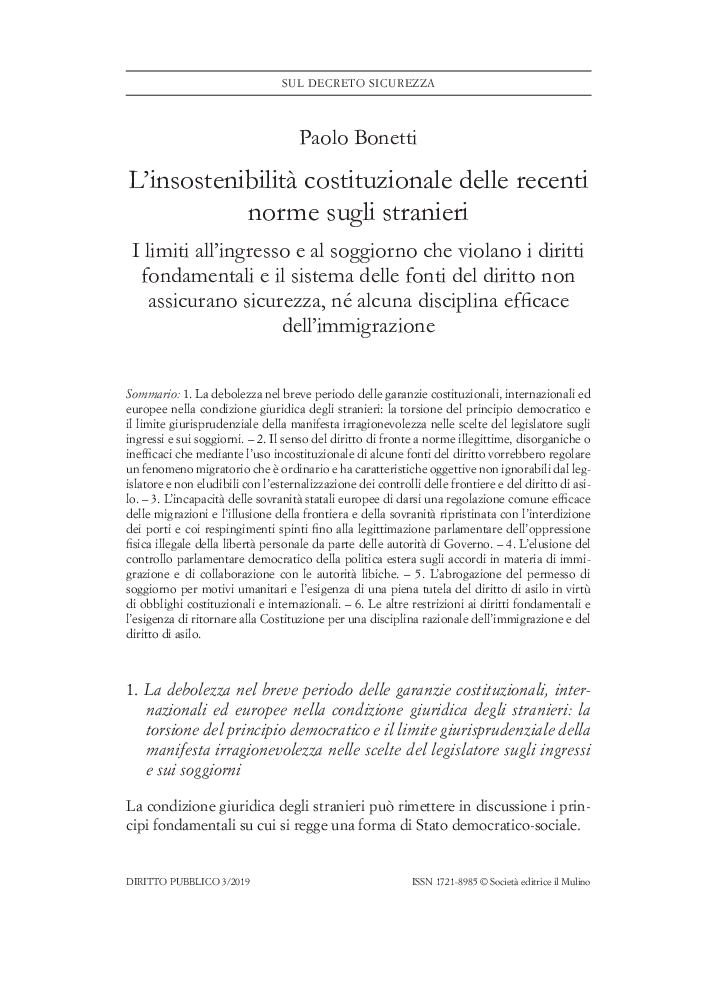