The paper aims at providing the cultural framework for a reading of Antonin Scalia's mission as U.S. federal justice: his office - covered for more than 30 years during which he adopted, improved and crystallized the judicial doctrine called 'originalism' - might help the European observer to study the paradigmatic intricacy of the existential debates around the basic tenets of American constitutional foundation and, ultimately, around the endurance of that pact. Analysing this kind of legal experiences, in which segments of individual and common lives are bestowed, requires to focus not only on scientific or judicial works, but also on the roles that the lawyer has played, on his/her the civil and academic commitments, on his/her network of relationships, etc. Therefore, in order to grasp the extent of Scalia's contribution to the American constitutional culture, it may not be enough to rely on a single cognitive source: the several readings of the 'character' often suffer from the same rhetoric with which he had fed his own popularity; monographs entirely devoted to him have biographical, if not angiographic taste; an exclusive evaluation of his opinions can reach outcomes difficult to manage. On the other hand, the scope of his non-judicial writings, often neglected, can clarify the maturation of a cultural journey that has been deeply influenced by the environment in which he had been trained as lawyer. On the base of these sources, the first part of this paper is devoted to Scalia's legal education, read in the context of the postmodern theories of law, when a crisis of foundational principles developed and numerous argumentative aesthetics in the constitutional interpretation flourished: this is the context in which the genesis of contemporary originalist thought shall be located, as well as its use as judicial policy by the Reagan administration. However, the roots of this doctrine can be traced in the popular affection to the mythological figures of the founding fathers, which brought the first originalists to the look for those original 'intentions': once understood the ambiguity of this perspective, Scalia was one of the first to shift the core of the argumentation (and the core of the originalist inquiry) from the intentions of the framers to the original meaning of the text, merging historical and textual analyses. In the second part of the paper, the scope of this contribution is studied along with the intellectual history of American public law, particularly according to the dualistic readings provided by the sciences of government and sciences of history. A conclusion is reached according to which 'originalist' can be defined Scalia's doctrine only for the combination between classical textual argumentation and its projection to a (constitutional) document dating back two centuries before, flavoured with the usual rhetoric on legitimacy of the courts and exactness of the method, but finally not so different from the same assertiveness with which in the past the dramatic relationship with the historical depth has been recounted by the constitutional community: the apparent contradictions of this experience can only be read once placed in the 'sense normativity' that pervades the entire American society of common law. 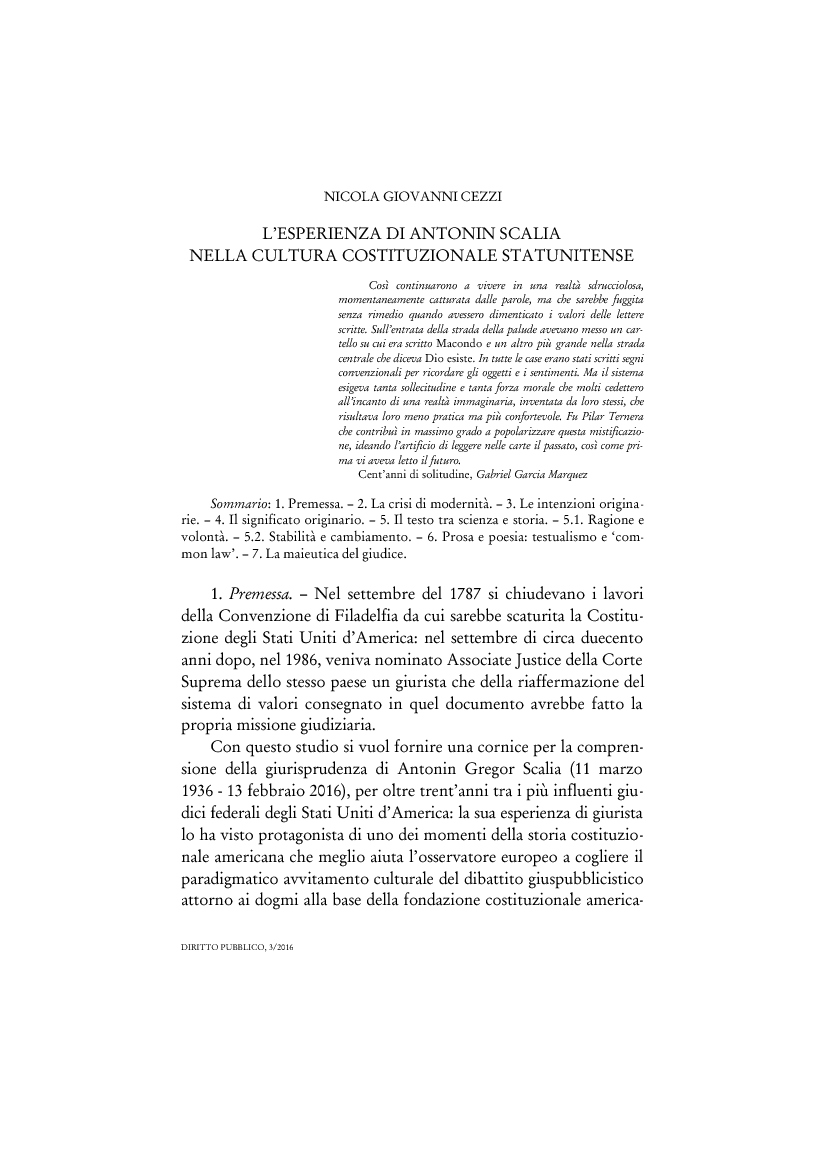